Black Santa back on Cathedral steps 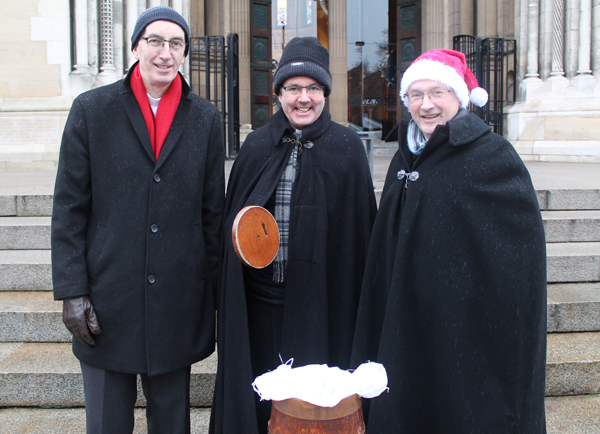 Black Santa is back on the steps of Belfast Cathedral raising vital funds for charities which support people in need in our community and further afield.

It was a busy first day for Dean Stephen Forde on Monday, with a round of media interviews and a host of special visitors, including Lord Mayor of Belfast Councillor Deirdre Hargey; actor and comedian Tim McGarry, representatives of the Cathedral Quarter BID who donated some lanterns to create a warm glow on these dark nights, and the President of the Ulster Reform Club, Andy Wells.

Children, taxi drivers and passers-by all stopped for a chat with Black Santa himself and his little helpers (Canons and fellow clergy) who have been keeping him company. PHOTO ALBUM

Monday dawned bright and frosty for Dean Forde’s first full Sit-out (he did a few stints on the steps last year as Black Santa in training!) but Tuesday morning wasn’t so kind, with a lot of rain. 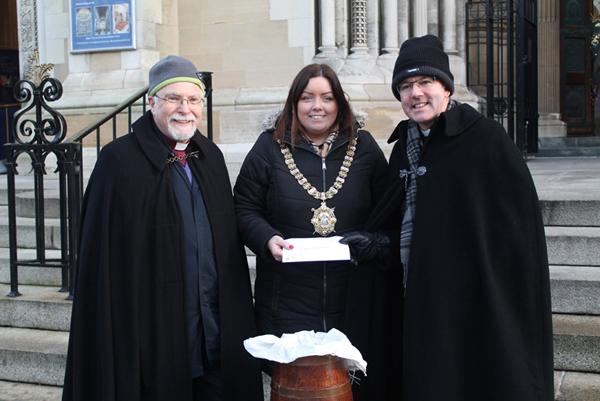 Lord Mayor of Belfast Councillor Deirdre Hargey, makes a donation to Black Santa. With her are the Bishop of Down and Dromore, the Rt Rev Harold Miller, left, and the Dean of Belfast, the Very Rev Stephen Forde.

The Dean has expressed thanks to everyone who has stopped, whether to make a donation, record an interview or take photographs to publicise the charity Sit-out, or simply to say hello.

This, the 42nd Black Santa Sit-out, continues until Christmas Eve, with the exception of December 23 when the Dean will be busy with Lessons and Carols for the City at 3.30pm – to which everyone is warmly invited.

Admission to the Cathedral is free throughout the period of the Sit-out, though Black Santa will be very happy to accept donations!

Funds raised will be distributed to local charities at the annual Good Samaritans’ service in February. If you would like to make a donation, but can’t get to Donegall Street, you can donate online at https://belfastcathedral.charitycheckout.co.uk/cf/Black-Santa-Sit-out-Appeal.