Jacqueline awarded MBE for her service to north Belfast 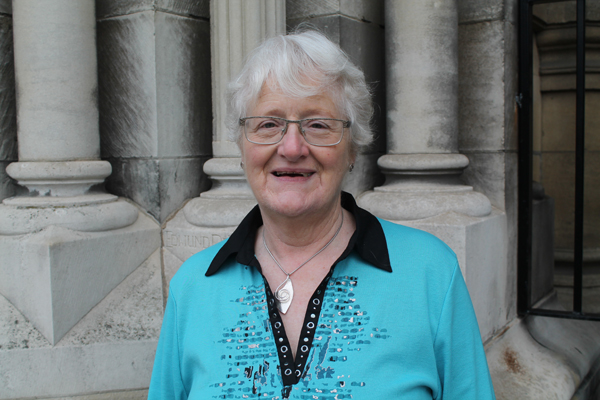 Congratulations to Mrs Jacqueline Weir who has been awarded an MBE for services to the community in north Belfast in the Queen’s New Year Honours.

In her parish she is Glebewarden, Freewill Offering Secretary and has been a member of the Select Vestry for more than 40 years.

Jacqueline has been a leader in St Matthew’s Guides since the age of 18, moving straight into the role from being a guide and ranger herself.

She also sits on the Board of Governors of three north Belfast schools.

Jacqueline, 64, has lived in north Belfast all her life. Her maiden name is Craig, and her late husband was Mr Harold Weir.

Jacqueline graduated from Queen’s University in 1975, and was among the University’s first Computer Sciences graduates. She began her career in computing in Shorts, where she worked for around 20 years before moving to Queen’s to work in IT. She retired from Queen’s three years ago.

Speaking of her long commitment to Guiding, Jacqueline says it is something she thoroughly enjoys. “Guiding is a superb organisation and has given me opportunities I would not have had otherwise,” she said. “Over the years I have held all sorts of roles, including Deputy Chief Commissioner for Ulster. I am currently Training Co-ordinator for Ulster.

“Through Guiding, young women get to build confidence and resilience – resilience is something young people need to cope with what is a very different world, with all the issues of mental health and well-being.

“They also learn to be good citizens and play a role in their community as they grow up.”

Jacqueline said that she had been delighted that at a recent ceremony, a number of her former guides received awards for long service to the organisation.

“I have been involved in school governorship since the mid-70s. At the time schools didn’t have their own governing bodies, instead there were District Boards. My rector, the late Jim Rooney, suggested they needed someone younger for the Board and I have been doing it ever since!” Jacqueline said.

“I feel it is very important to help young people to achieve their potential. I also enjoyed it because it was something different to my own professional life.

“I want to give back to a community that has suffered a lot over the years. Many of my contemporaries moved away through the height of the Troubles and I feel it is incumbent on me to give something back.”

Jacqueline said she was absolutely delighted to receive the MBE. “It is a lovely honour and the fact that people felt they could nominate me means a lot. People have said a lot of lovely things over the past few days.”

Jacqueline is now looking forward to a trip to Buckingham Palace later this year.