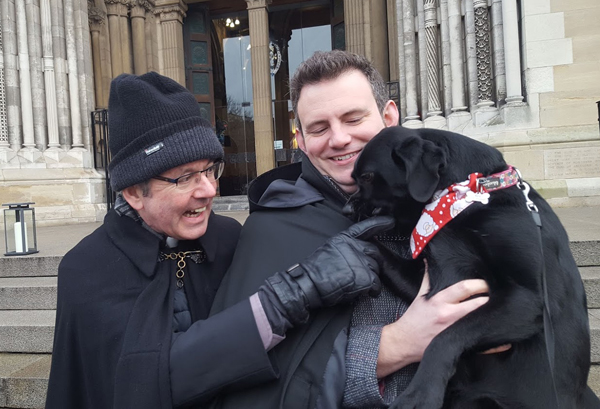 Flashback to December 2018 when the Rev Ian Mills, curate in Larne, and his dog Xena joined Dean Stephen Forde on the steps of Belfast Cathedral for the Black Santa Sit-out.

The 2018 Black Santa Sit-out on the steps of Belfast Cathedral has raised a fantastic £160,000 for local charities.

Dean Stephen Forde said he was delighted with the amount raised. “A big thank you to everyone who donated to this year’s Sit-out, whether you came by in person or sent your donation by post or made a payment online.

“Your generosity means we can help support vital work charities across Northern Ireland are doing with children, elderly people, the homeless, those who are sick or those who are living with a disability.

“Some of the funds will be channelled abroad through Christian Aid to help those who live with little food and few prospects.”

The Sit-out took place between December 17 and Christmas Eve, with Dean Forde joined on the steps by a band of helpers including Canons of the Cathedral and other clergy. A highlight of this year’s Sit-out was the first ever Black Santa Bazaar held on Thursday December 20, with hundreds of people visiting to enjoy a wide range of art and craft stalls, food and refreshments.

This was Dean Forde’s first Black Santa Sit-out and he said he had thoroughly enjoyed the experience.

“The weather was kind and there were lots of memorable occasions including bus drivers, delivery drivers and taxi drivers stopping by to make their donation,” Dean Forde said.

The money raised by Black Santa 2018 will be distributed to around 200 charities at the annual Good Samaritans Service in Belfast Cathedral on Sunday February 3. Special guest Linda Bryans, a journalism lecturer and former UTV presenter, will hand over the cheques.