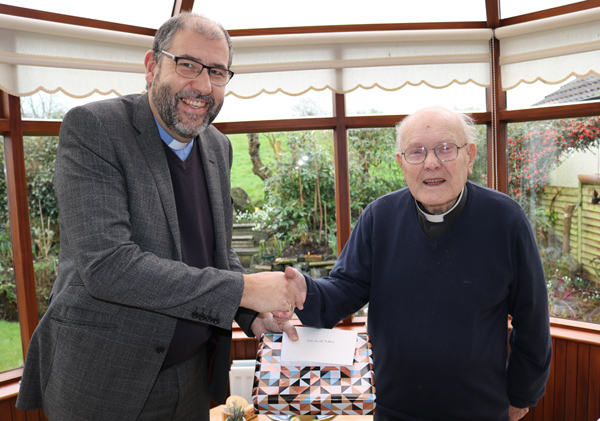 Archdeacon George Davison presents a gift to Canon Ken Ruddock as a thank you from the diocese on the occasion of his retirement.

After 20 years as Connor Diocesan Curate, the Rev Canon Ken Ruddock has retired.

Archdeacon George Davison, Commissary for the Bishop of Connor, visited Canon Ruddock in his Ahoghill home on Friday January 25 to present him with a thank you gift on behalf of the diocese.

Canon Ruddock, 88, was ordained in 1953 for the curacy of St Patrick’s Parish, Ballymena. He served a further curacy in St Thomas’s, Belfast, before moving to the Parish of Tomregan, in the border village of Ballyconnell, Co Cavan, in 1960. In 1968 Canon Ruddock, his wife Kathleen and three children moved to the Parish of Lower Falls, Belfast.

Canon Ruddock was rector of Whitehead and Islandmagee from 1980 until his retirement in 1996. He was appointed Diocesan Curate in 1998.

As Diocesan Curate, Canon Ruddock’s job was to ensure all churches had cover for services during vacancies, holidays and sickness.

Presenting Canon Ruddock with the gift, Archdeacon Davison said: “I want to say on behalf of Connor Diocese how much we appreciate all that you have given.” 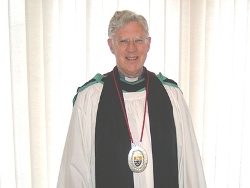 Canon Ruddock will be succeeded as Diocesan Curate by Dean John Bond, former Dean of Connor.

You can read more about Canon Ruddock’s ministry and his work as Diocesan Curate in the next issue of the diocesan magazine Connor Connections, which will be available in mid-February.

Canon Ruddock (who incidentally won the 1.5mile Liffey Swim in Dublin in 1947) is now considering taking another University Degree!