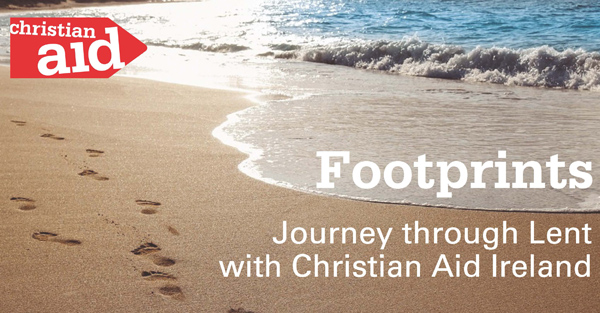 Christian Aid Ireland has launched its Lenten resources which for the first time include a daily email reflection series called ‘Footprints.’

Each day during Lent, participants receive an email, consisting of a prayer and a short reflection based on one of the Bible readings from the Revised Common Lectionary.

The reflections will be written by an exciting line-up of Christian leaders, theologians, academics, thinkers and practitioners from Ireland, Brazil, Kenya, Sierra Leone and South Africa, including:

There will also be contributions from Christian Aid’s international staff and partners:

David Thomas, Church and Community Manager at Christian Aid is coordinating the Footprints series. “We are delighted that so many eminent individuals have agreed to write a reflection for us for each of the days between Ash Wednesday and Easter Sunday,” David said.

“Our hope is, as participants journey with us through Lent, that they will consider their metaphorical ‘footprint’ – the legacy they leave behind and the impact of their lifestyle on people and planet.”

Footprints is free to receive at caid.ie/lent

Your money making a real difference 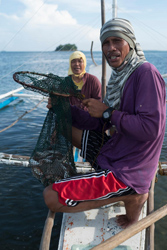 Sept 2018, Tabugon island, Philippines. Lope and Eva returning from a night of hook and line fishing. But without the help of Christian Aid’s partner, they’d never have achieved such a good catch.

Christian Aid is also appealing to church members to consider ordering Lent cash collection boxes to collect small change throughout Lent for Christian Aid? Small change can lead to big change in the lives of those living in poverty, as the story  below of Lope and Eva illustrates.

This Lent season, Christian Aid is focusing on the theme of climate change, calling on churches in Ireland to stand together with fisherfolk Lope and Eva, who live on the island of Tabugon in the Philippines, as they rise up to the challenges of life in a changing, erratic climate.

In 2013, Lope had to sell the only means to his livelihood – his fishing boat – to pay for medication when he fell ill. One of his sons was forced to drop out of school to work and support his family.

That same year, Super Typhoon Haiyan hit with unprecedented force. As the water surged and the terrifying winds pounded the island, the family hunkered down and prayed for safety; people in the village, with nowhere else to go, crowded into Lope and Eva’s home for shelter. There was barely enough food for the family, never mind all the neighbours, but somehow everyone was fed and safe.

In 2015, Lope began campaigning against illegal fishing in the area, which destroys the marine life and the livelihoods of the local fishermen. Now, thanks to support from Christian Aid’s partner ICODE, he and his team can protect the environment, patrolling the seas by boat and watching from a guardhouse.

The villagers were also able to set down an artificial reef, made from over three hundred concrete jackstones. These safely anchor the coral, allowing them to grow into healthy reefs again and attract an abundance of fish – while keeping illegal fishermen away.

For Lope and Eva, all of this now means that they, and others, can eat well, and keep their children in education.

Christian Aid’s David Thomas said: “We hope that people will take the opportunity during Lent to journey with Christian Aid as we seek to stand alongside the poor and learn together how we might act justly, love mercy and walk humbly with God.”