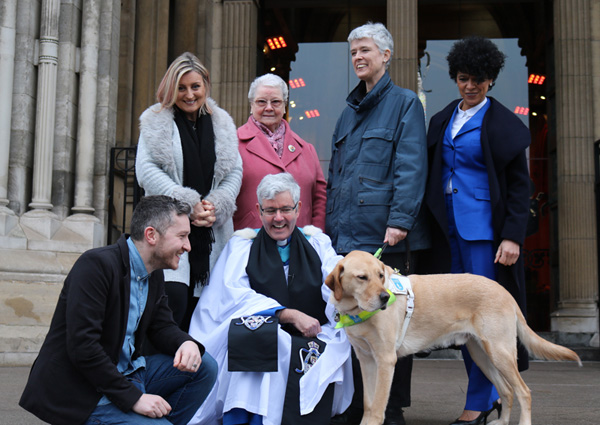 Two hundred and twenty local charities, including those working with the homeless and with people with mental health issues, received grants from Belfast Cathedral’s Black Santa Appeal at a special service on Sunday February 3.

The Sit-out by Dean Stephen Forde and Canons of the Cathedral in the week before Christmas 2018 raised £168,000. Special guest Lynda Bryans, journalism lecturer and former broadcaster, handed over the cheques at Sunday’s Good Samaritans Service.

The Sit-out was founded in 1976 by Dean Sammy Crooks, dubbed Black Santa by the local media because of his black Anglican cloak, and the tradition is continued every year by the Dean of the Cathedral.

Charities to benefit from the money donated all do vital work in the community, supporting children, people with disabilities, the elderly, and families who are socially disadvantaged. A portion goes to Christian Aid to help people in need overseas.

The Dean this year focused on organisations which support the homeless and also charities helping people with mental health issues. All grants range from £550 to £1,000.

Welcoming all the charities and special guest Lynda Bryans, the Dean said.

“It is an amazing privilege to know that 220 different volunteer organisations are represented in the Cathedral today. You reflect the very best of our society. Through the often difficult work you do, you make a difference to thousands of lives. You represent a kaleidoscope of activities and talent given for the sake of others.

“This is a day to celebrate everything each of your organisations and charities do, often unseen and unsung.”

Dean Forde thanked everyone who had donated to the Black Santa appeal, the volunteers who supported him on the steps, the Cathedral family who worked behind the scenes, sextons and Cathedral staff, and local businesses who had donated hot drinks to keep the Santas warm.

“There are those who say that our society has become more selfish and less caring. The evidence here today doesn’t back up that assertion,” said Dean Forde. “During the service we will sing the hymn ‘When I needed a neighbour were you there?’ The answer at this service today is simply ‘yes.’”

Some of the larger charities to benefit from funding include Shelter, the Simon Community and the Welcome Organisation, and smaller charities include The Wave Project, which offers surf therapy for young people, east Belfast-based Fighting Words, and The Over the Hill Music Collective which gives older musicians a space for freedom of expression and a place to build confidence and community.

Read more about some of the charities which benefited from the 2018 Black Santa Appeal HERE.

Dean Forde said he intends to focus on particular areas of work each year, and this year chose those charities working with homeless people and rough sleepers. “This continues to be very serious, visible and complex issue in the city of Belfast.  It is why we are working with charities and organisations who have knowledge and expertise,” the Dean said.

“We are also focusing on organisations supporting people who are facing mental ill health. I am aware this is an issue which touches the lives of many people and those that know them best. It is an area still in need of significant resourcing.”

Taking a break from handing out the cheques, Lynda Bryans said this was a real ‘feel good’ service. She congratulated the Dean and those who donated the ‘incredible sum’ of £168,000 in the Dean’s first year as Black Santa.

Reflecting on Dean Sammy Crooks’ first Sit-out in 1976, Lynda said: “Who would have thought that 40 plus years later, Dean Stephen would be carrying on this tradition. It is a credit to him and previous Deans that they have continued something that has become a fixture in our city’s Christmas calendar.”

Lynda said she and her family make a point of putting money into Black Santa’s barrel every Christmas.

“Black Santa is the antidote to the busyness and commercialism that comes upon us all at this time of year,” she said. “Black Santa reflects the culture of our city, a city with a giving heart, and that compassion is reflected in what the Dean does.”

Lynda paid tribute to the charities present for their ‘incredible work.’

Organist at the service was Mr David Stevens, Master of the Choristers. There was beautiful music from the Cathedral Choirs, directed by Organ Scholar Jack Wilson. The Bishop of Connor’s Commissary, Archdeacon George Davison, read the story of the parable of the Good Samaritan.

A collection was taken up for the Black Santa Appeal 2019, and donations can be made online at https://belfastcathedral.charitycheckout.co.uk/cf/Black-Santa-Sit-out-Appeal at any time of the year.