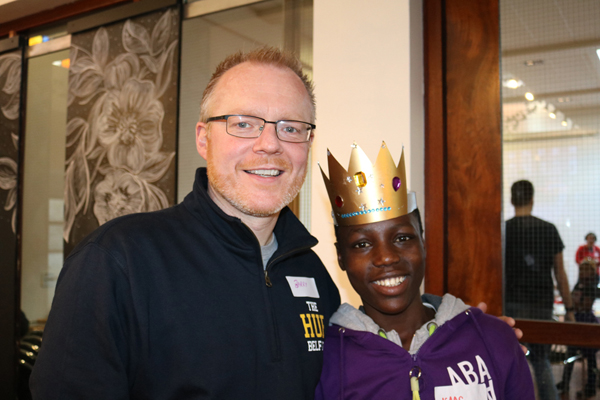 The Rev Barry Forde with Isaac, a member of the Abaana New Life Choir, who is sponsored by the Hub.

A group from the Hub Chaplaincy at Queen’s University will use pedal power to raise pounds for two charities working with children and young women in Uganda.

The Rev Barry Forde, Church of Ireland Chaplain at Queen’s, will be joined by four other fit fellows to cycle the length of Ireland, from Mizen Head in Cork to the tip of Malin Head in Donegal – covering 400 miles in four days from May 4-7 in a bid to raise £10,000.

The money will support the charities Abaana and Waakisa, at the same time raising awareness of the vital work these organisations do in Uganda.

It is work Barry and others from the Hub have been privileged to witness at first hand, as teams from the Hub visited Uganda in 2015 and 2017. Another team, primarily made up of students, is preparing to go out to Uganda in June this year.

It will be led by Hub staff members Rachel Kennedy and James Turner, and by year-out ministry interns Amy Atwell and Tim Purdue.

Barry is not joining the team this year, but will play his part in the #400miles4uganda cycle challenge. Joining him on the road are The Hub’s worship team leader James Turner, James’ dad Alec Turner, Chris McDowell, a member of the Church of the Resurrection at Queen’s, and Peter Anderson, a member of the Chaplaincy management group. The team will be supported by Carol Turner, wife of Alec and mum of James, who will drive the support vehicle.

Barry said that he could not have considered a challenge of this magnitude when he first started cycling in 2015.

“I am not looking forward to day three when I will really feel sore. By day four you are thinking about home, and there is a bit of momentum on days one and two but I think day three will be tough,” he said.

“We hope to call at Church of Ireland parishes en route, as we pass through the dioceses of Cork, Limerick, Tuam, Elphin and Kilmore, and Raphoe.”

He has been invited to a number of parishes to talk about the cycle and the projects supported by the Hub in Uganda, and the students have helped fundraise by running bun sales. “This way, in addition to connecting with dioceses along the route, we have made connections with quite a number of other dioceses,” Barry said. 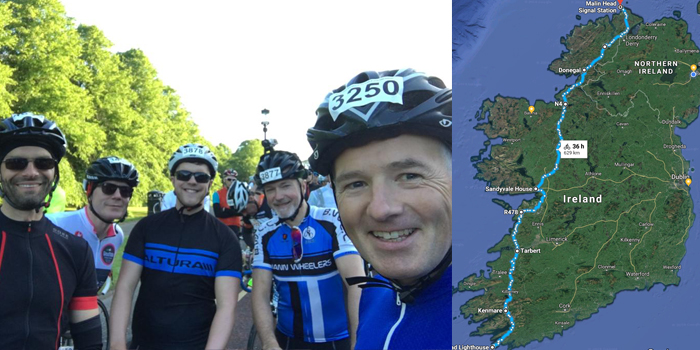 The Hub #400miles4uganda team and their route from the bottom of Ireland to the top.

The cyclists and the students who will travel to Uganda had the opportunity to meet some of the children supported by Abaana when they hosted the New Life Children’s Choir at the Hub on February 27. The choir is doing a concert tour of Ireland and the UK. Uganda team members organised crafts and activities for the 18 children, hosted dinner for them, and then enjoyed a concert that evening.

It was a particularly special day for 15-year-old Isaac, a member of the choir, as he is sponsored by the Hub.

“A few years ago I was living on the streets of Kampala. I had to sleep on steps at night,” Isaac said. “I heard about the street programmes, and took part for a month, then they told me I could go to the New Life Home.

“It is nice. I have made new friends.  I love to sing. To get into the choir I had to play the drums and dance and sing. I am excited to be here, but it is cold!”

Isaac only discovered that he would meet his sponsors the day he arrived at the Hub. “It was a really big surprise,” he said. “In Uganda they just tell you you have a sponsor, but you don’t know their name.”

Hearts were definitely touched in the Hub that evening, as they will no doubt be in other venues during this tour, when Isaac sang his solo ‘A Million Dreams’ which pretty much says it all…

Abaana founder and Chief Executive Scott Baxter was at the Hub with the choir to meet the cyclists and the students heading to Uganda. He paid tribute to the cyclists for their dedication, and all the training they were doing for the 400 mile challenge. “They are very committed to Uganda and are great supporters of Abaana and are passionate about helping communities,” Scott said.

“Being Jesus in the community is what the Hub does here in Queen’s and it is what we do in Uganda. The New Life Choir connects communities, building bridges between Uganda, the UK and Ireland.”

Barry said the visit to Uganda also connects communities. “It is an experience for the students to go out for two weeks, but the students return to their own churches in other towns, and new relationships are established between Abaana, Waakisa and other churches, as the students talk about overseas mission, teams and sponsorship.” 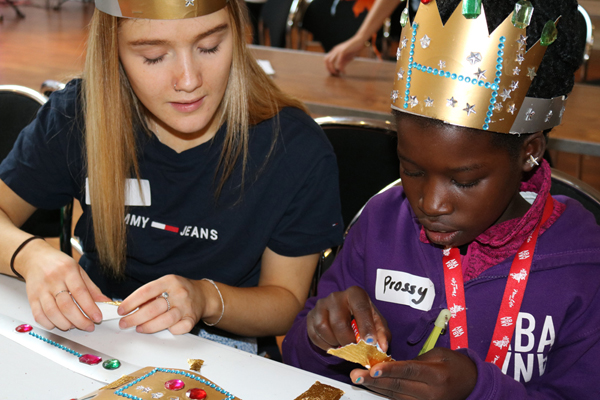 A member of the Hub Uganda team does some craftwork with New Life Choir member Prossy.

Barry said the connection between Queen’s and both charities was well established. Sharon Hamill, a former chair of Connor Youth Council, and member of the Church of the Resurrection, was a Waakisa Board member. Scott established Abaana when he was on a year out. “I returned to Queen’s and some of my first fundraising was done here,” he said.

Gina Copty, a parishioner of the Church of the Resurrection, will be on the team heading to Uganda. Her husband Chris is doing the Mizen to Malin Head cycle.

The couple met in South Africa, but this will be Gina’s first time in Uganda. “I have four children. For me, I look at my kids and the lives they have and I think of the kids on the streets in Africa and other places and I feel that the world is not fair, and we should do our best to balance this out a little,” she said.

Gina has worked for a human rights organisation in the USA, and is currently a member of the Commission for Christian Unity and Dialogue and on the Church of Ireland Inter-Faith Working Group. She has also trained in counselling for rape survivors. This will be valuable in Uganda, as Waakisa supports young vulnerable girls who are pregnant and alone – and in some cases may be victims of rape or incest.

“I hope I can use my strengths in this area to contribute to making someone’s world a better place,” Gina said.

Richard Lowry, a civil engineering student from Dundonald, was on the 2017 Hub Uganda team, and will return this June.

“Seeing the work Abaana does in the street kids’ mission made me want to go back,” Richard said. “The boys are so well mannered and thoughtful and love getting attention and having people play with them.

“One of the things that really struck me was seeing young ones sitting sniffing drugs and being taken away to safety by the Abaana people. 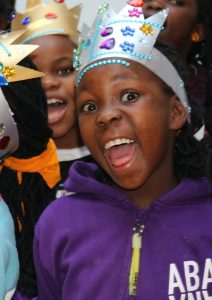 Having fun at rehearsals for the concert in the Hub on February 27.

“I am looking forward to getting to see the new guys in the New Life Homes and seeing the street kids and sharing God’s love with them.”

James Turner has both the cycle and the trip to Uganda to look forward to. “I love a challenge,” he said. “I figured the 400 mile cycle would be good to raise the profile of Abaana and would be something massive that would push me out of my comfort zone,” he said.

Another reason the 400 miles will be such a challenge for James is that both he and his dad Alec are Type 1 diabetics. “We will need to be well trained and stocked with the right foodstuffs on the cycle,” James explained. “Fortunately Mum is a trained nurse and she is driving the support vehicle.”

James has been in Uganda three times before, twice with the Hub.

“I am looking forward to seeing our students getting involved with the activities and throwing themselves into a different culture, stepping up to the mark with challenges like running kids’ clubs, and cleaning latrines. It is as much about that as it is seeing the joy on the faces of the children we are working with.”

To learn more about 400Miles4Uganda, or to make a donation, visit www.400miles4uganda.org.