Hundreds learn about the life of St Patrick 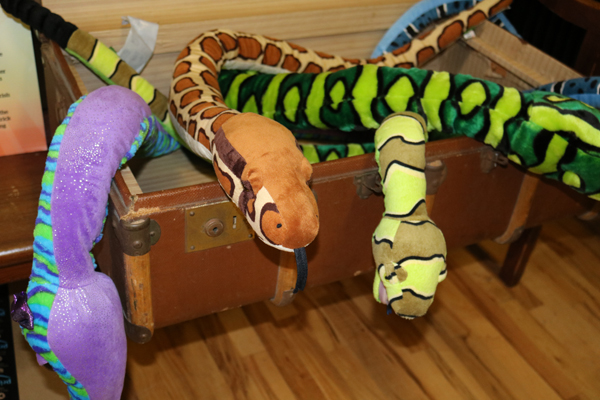 Well over 600 people, including 360 school pupils and CLCGB members, learned all about the life of Ireland’s patron saint at Patrick’s Mysterious Adventures in Christ Church, Lisburn.

The interactive exhibition and story trail opened at Christ Church Parish, Lisburn, on March 13, and ran until Saturday March 16, with a special St Patrick’s themed service on March 17 at 11.30am.

Pupils and teaching staff from seven primary schools jumped on board during the first three days, there was an evening for youth organisations, and around 250 people attended on the public day on Saturday March 16.

“It was a privilege to bring Patrick’s Mysterious Adventure to Christ Church in Lisburn and to work in close partnership with the clergy and parishioners,” they said.

“We loved sharing the story of Patrick in such a creative and enjoyable way and we were delighted that so many local schools and members of the community participated in the event.

“Our special thanks to Ross Jonas and Chris Neilands from Play It By Ear Drama Company and the Ven Paul Dundas, the Rev Derek Harrington and all the team at Christ Church.”

Full reports by Jill Hamilton below. 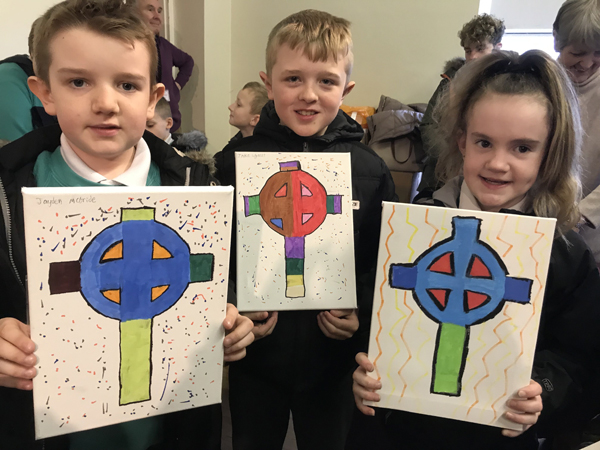 Connor’s Diocesan Children’s Council worked in partnership with Christ Church clergy and parishioners to host the event for local schools and the community.

We had three days where local schools were invited to come along and take part in our story trail and workshops based on the life of our patron saint Patrick. The story trail led the audience around seven different zones each depicting a different stage of Patrick’s life. The two schools’ workshops were a history workshop and an art workshop.

The schools taking part in the event were Old Warren, Brownlee, Central, Tonagh, Knockmore and Wallace Prep. We also had two schools who had participated last year – Broughshane Primary and St Patrick’s, Loughguile, who loved the trip so much they asked if they could come again with this year’s P5 classes.

When the school children arrived, they were welcomed and then split into two groups, one doing the workshops first and the other beginning with the story trail.

The story trail began with a visit to Patrick’s childhood home; a Roman villa likely to be somewhere along the west coast of Britain. The audience met Patrick’s parents who were looking for Patrick and filled everyone in on the kind of boy Patrick was – full of life and mischief and not always listening and obeying his parents.

The children were then taken on to the next zone where they met Patrick just at the point where Irish pirates arrive to take him away on a boat bound for Ireland and six years of slavery. The audience was taken onto the boat as well, and had to row to Ireland singing sea shanties.

The trail continued with a re-enactment of Patrick’s life as a slave in Ireland, his escape, journey back home and eventual calling by God to come back to Ireland as a missionary.

Finally we saw Bishop Patrick in Ireland teaching the pagan Irish the good news of Jesus and learned about his lasting legacy in Ireland.

This year we were fortunate to have Spencer Cusack from the Saint Patrick Centre in Downpatrick leading our history workshop. Spencer was very knowledgeable about all things Patrick, and was able to fill the children in on what life in Roman Britain and in Ireland was like during Patrick’s time, Patrick’s experiences as a slave, his church and legacy and his grave in Downpatrick.

The art workshop centred on drawing an Irish Celtic cross onto canvas using carbon paper to transfer the image. The children were reminded of the legend of how Patrick taught the Irish people by using their own holy symbol of the sun and adding the Christian cross. It is said that that is how the Celtic cross was first drawn.

The schools also took part in snake drawing and snake modelling competitions before the trip. All entries were displayed as part of the exhibition and the prize winners were announced during the school visits. All the pupils also took a goody bag away with them.

Our thanks to all the schools who participated and especially to their teachers for organising their pupils so well. The pupils were so well behaved and took part in everything with enthusiasm – it was a pleasure to have them along.

This was the first year that we had an evening for youth organisations. Victoria Jackson, who is on Connor Children’s Council, is the Development Officer for CLCGB and she organised for some of the local brigades to come along on Thursday evening.

As well as the Christ Church brigade, other brigades who joined us were St Michael’s, Shankill Road; Lambeg; St Hilda’s, Seymour Hill; and St Matthew’s, Broomhedge. Our thanks to all the leaders who brought their children along.

On Saturday March 16 we opened the doors to welcome the public to Patrick’s Mysterious Adventure.

We had four timed performances of the Story Trail throughout the day as well as a café, craft workshops from Jumping Clay and Julia’s Ceramics, a reptile exhibition from Talking Reptiles and Irish dancing. 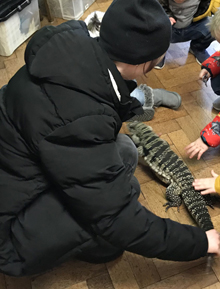 Real reptiles came along on the public day.

On Sunday March 17 there was a special St Patrick themed service in the church. Ross Jonas and Chris Neilands from the Play It By Ear Theatre Company, who led the drama all week, performed again in the service and Sister Karen Webb, one of the main organisers of the event, spoke about St Patrick’s faith and character.

The Ven Paul Dundas, rector of Christ Church, thanked all the team involved and gave a special mention to the Rev Derek Harrington who co-ordinated the Christ Church team and was instrumental in the success of the event.

Connor’s Children’s Council members would like to say a big thanks to Paul, Derek and the team from Christ Church for all the support in making Patrick’s Mysterious Adventure so successful and enjoyable to be a part of this year.