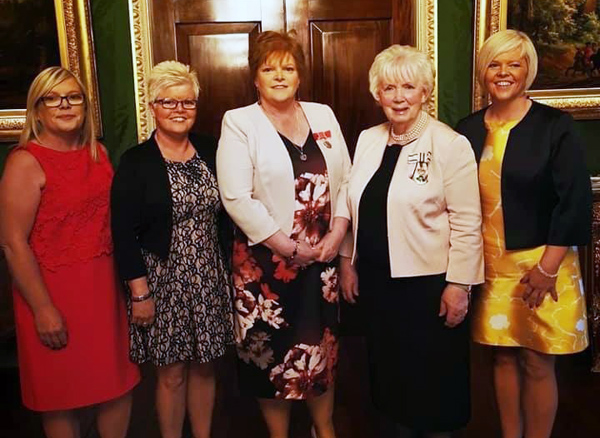 Glenda Rodgers-McCormick, centre, receives her British Empire Medal for services to the community in Bushmills from the Lord Lieutenant of County Antrim, Mrs Joan Christie, second from right at Hillsborough Castle. Also in the picture are three of Glenda’s sisters.

Many congratulations to Dunluce parishioner Glenda Rodgers-McCormick who has been presented with a British Empire Medal for services to the community in Bushmills.

Glenda received her BEM medal from the Lord Lieutenant of County Antrim, Mrs Joan Christie CVO OBE, at an investiture at Hillsborough Castle at the end of March.

She is now looking forward to attending a Garden Party in the presence of Her Majesty the Queen at Buckingham Palace on May 21.

For the past 13 years, Glenda has organised an annual exhibition highlighting the wartime sacrifices of people from Dunluce Parish and the surrounding area. During that period, her ‘Bushmills Through the Wars’ exhibition has raised in the region of £40,000 for various charities.

This year’s exhibition will take place in Dunluce Parish Centre from July 11-21, and Glenda says it will be bigger than ever. Many of the artefacts are from Glenda’s own personal collections, built up over the years

Glenda was notified by the office of Prime Minister Teresa May that she had been nominated to receive the BEM at Christmas. “I was allowed to make it public on 27th December which was my 60th birthday so all my family and some friends were there. It was very exciting but it was hard to keep it a secret!” Glenda said.

“I am very humbled and at the same time honoured to receive this award which is for my charity work in our local community.”

Glenda was accompanied to the investiture at Hillsborough Castle by three of her sisters. “It was formal but we were made to feel very comfortable although I was a bit nervous,” she said. “I now go to Buckingham Palace on May 21 for a garden party in the presence of Her Majesty which will be amazing. I am very humbled and it makes me want to do more!

“The war exhibition is in its 13th year and it gets busier every year.  I aim to commemorate the men from our town and surrounding area who gave their lives in both world wars.”

‘Bushmills Through the Wars’ normally raises around £4,000 each year. Half of the proceeds are donated to the Church (this year it will be channelled to the Bishops’ Appeal), and the other half is divided between The Poppy Appeal and a local charity which changes each year – Cancer Research will benefit in 2019.

Keep an eye on this website for further details about the ‘Bushmills Through the Wars’ exhibition.