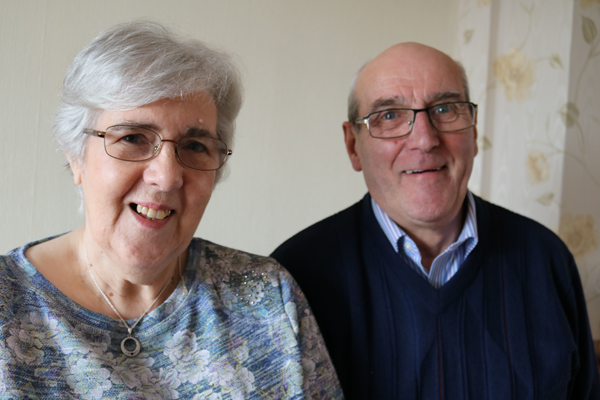 Jim Patterson and his wife Rosemary were at Windsor Castle where Jim was presented with Maundy money.

Mr Jim Patterson was this morning a guest at St George’s Chapel, Windsor Castle, where he received a purse of Maundy money from Her Majesty the Queen.

Jim, who is a lifelong member of the parish of St Mark, Ballysillan, was nominated for the Royal Maundy Thursday gift by the Bishop of Connor, the Rt Rev Alan Abernethy.

He was accompanied to Windsor by this wife Rosemary, who retired as Personal Assistant to the Bishop of Connor in March last year.

Jim is one of 93 men and 93 women to receive the Maundy Purse this year. The number distributed correlates to Her Majesty’s age.

Another recipient from Belfast is Mrs Mary McGrath. She was also nominated by Bishop Alan, with the help of Roman Catholic Bishop Noel Treanor, as Bishop Alan wanted to reflect the excellent relationship that exists between the Diocese of Connor and the Diocese of Down and Connor.

Jim, aged 76, was baptised and confirmed in St Mark’s. He married Rosemary in the church in 1974 and they both continued to worship in the parish.

Jim’s roles within St Mark’s Church have included being a member of the Select Vestry from 1966 until the present, Honorary Treasurer of the Parish from 2000 to the present, and he has been rector’s churchwarden since 2003.

In addition to unstinting commitment to his church, Jim has also held the roles of Diocesan Council member and Glebes Secretary within the Diocese of Connor and has been a member of the Church of Ireland General Synod for decades.

Jim grew up on the Upper Crumlin Road, and has never lived outside the parish boundary of St Mark’s. He began his career in the printing business with the firm of WW Cleland in Durham Street, and remained with the same company, through its many changes, until he retired in 2006.

Rosemary was full-time Secretary / PA for Bishop Alan for 10 years, and prior to that she was part-time secretary to former Bishop of Connor, Alan Harper, for three years.

Rosemary’s career with the church began in 1965, when she worked with Church Mission Society (CMS) Ireland for four years before moving to the diocesan office for Connor and Down and Dromore in 1969. In 1976 she took some time out following the birth of her daughter Helen, and returned to work in diocesan office in 1989, working in Stewardship, Board of Education and with the Bishops.

The couple said they were ‘taken aback’ when Bishop Alan told them he had nominated Jim for the Maundy money. 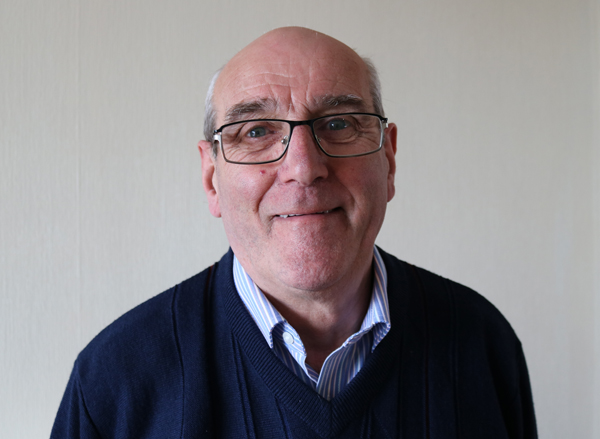 “I was totally overwhelmed,” said Jim, speaking in advance of the visit to London.

“I see it as recognition of work both of us have done in the church. We are very much looking forward to the service in Windsor Castle, and I am looking forward to meeting the Queen. Someone who has reigned for that length of time is unique. This is probably the one and only chance I will have to see her or be close to her.”

The couple flew to London yesterday and stayed in Windsor last night. Today’s service began at 11am, although Jim and Rosemary had to be in place in the Chapel by 9.30am.

“I am a bit nervous in case I make a mess of things, but hopefully I will just have to follow instructions,” said Jim.

“After the service there is a reception at the Castle, so we may have time to wander around Windsor, and will be able to relax and enjoy it.

“The Maundy money will be something special to leave the grandchildren,” Jim added.

Nominating Jim for the Maundy Thursday honour, Bishop Alan said: “Jim’s commitment and faithful service to St Mark’s during the preceding 40 years cannot be overestimated. He and Rosemary remained in their community during a very tumultuous period of the Troubles in Northern Ireland.  They continued to live, worship, serve in St Mark’s and the diocese, and share their faith within their community.

“Jim is a true example of Christian service and I am delighted to nominate him for this recognition.”

Mary McGrath, Bishop Alan’s other nominee, was born on the Falls Road, Belfast, in 1948 and joined the Clonard Junior Branch of the Apostolic Work Society at the age of 10. The Society aims to help missionaries in Third World countries.

Mary married James in 1972 and moved to Randalstown where she joined the parish branch of the Society. She has served on the Council of Apostolic Work and held the offices of Secretary and Treasurer before being appointed Diocesan President in 2017, a role which she still holds.

She also served on the Parish Pastoral Council for four years and is a Minister of the Word.   Mary and Jim have five children and five grandchildren.

The Royal Maundy is an ancient ceremony, inspired by The Bible. On the day before Good Friday, Jesus washed the feet of his disciples and commanded them to ‘Love one another’. By the thirteenth century the Royal Family was taking part in similar ceremonies. By washing the feet of the poor and giving money and gifts, they were showing humility and compassion.

When Henry IV became king, he introduced a new tradition, deciding to give the same number of gifts as his age. So, for instance, when the monarch was forty, he gave forty of his subjects Maundy gifts. It became the custom for the sovereign to perform the ceremony, and the event became known as the Royal Maundy.

The first Maundy money ceremony took place in the reign of Charles II, when the king gave people undated hammered coins in 1662.