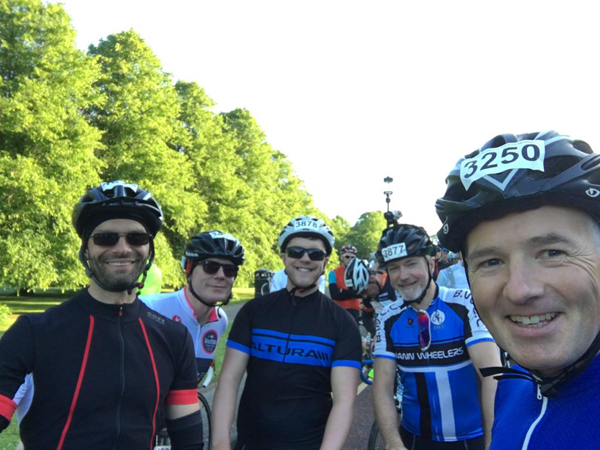 A team from the Hub Chaplaincy at Queen’s University, Belfast, is counting down the days to the start of their mega cycle from the bottom of Ireland to its very top.

400 Miles 4 Uganda will raise funds for Abaana and Waakisa, charities working with children and young women in Uganda.

The Rev Barry Forde, Church of Ireland Chaplain at Queen’s, and his team will pedal from Mizen Head in Cork to Malin Head in Donegal from May 3-7.

They head south this Friday for a 5.15pm start at Mizen, cycling the 32 miles to Bantry to ease them into the challenge.

They depart Bantry the following morning, pedalling to Kenmare and tackling the largest climb of the event – 1,000ft over six miles – in the course of this 27.5 mile stage. From there it is on to Killarney and another big climb – 850ft over 5-6 miles. After lunch in Killarney they will cover another 20 miles to Tralee, arriving mid-afternoon, then it is on to Tarbet and the Shannon Ferry before calling it a night.

Sunday’s ride takes them from Kilrush to Galway, via Spanish Point and the Cliffs of Moher. On Bank Holiday Monday the team will be back in the saddle to pedal to Bundoran via Tuam, Knock and Sligo.

They will cover more than 110 miles on their final day, travelling via Donegal town, Ballybofey, Raphoe, Londonderry, Moville and finally reaching the finish line on the north coast at Malin Head in the early evening

Joining Barry on the cycle are The Hub’s worship team leader James Turner, James’ dad Alec Turner, Chris McDowell, a member of the Church of the Resurrection at Queen’s, and Peter Anderson, a member of the chaplaincy management group. The team will be supported by Carol Turner, wife of Alec and mum of James, who will drive the support vehicle.

Barry, who started cycling to get fit in 2015, said he anticipated day three would be the toughest, when they would all be a bit sore, with many miles still to go.

The cyclists will call at Church of Ireland parishes en route, as they pass through the dioceses of Cork, Limerick, Tuam, Elphin and Kilmore, and Raphoe, raising awareness of the work of Abaana and Waskisa.

Teams from the Hub have visited Uganda to work with the two charities in 2015 and 2017, and another is preparing to go in June.

You can follow the team’s progress on the 400 Miles 4 Uganda Facebook page, where you can also make a donation.

In the video below, produced by Stranmillis University College where Barry is also Chaplain, he and James talk about the cycle, and what prompted them to undertake this challenge.

This Mayday weekend, college chaplain Barry Forde from The Hub Belfast – along with 4 others – will be attempting to cycle 430 miles across Ireland to raise funds and awareness for two of their Ugandan partner charities, Abaana and Waakisa. If you'd like to support the team on their challenge, follow them at 400 Miles 4 Uganda or donate via the website here: http://www.400miles4uganda.org/