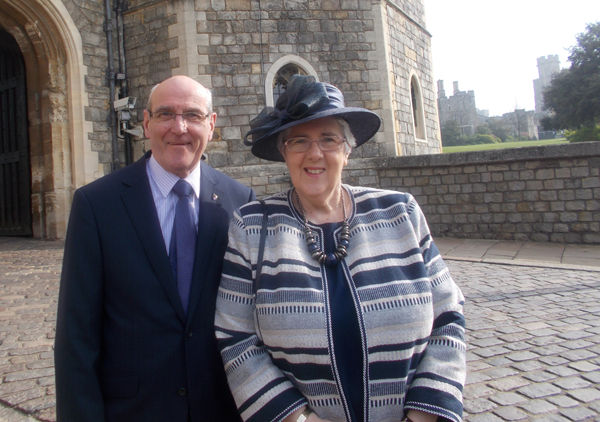 Jim and Rosemary Patterson at Windsor Castle, where Jim was presented with a gift of Maundy money by Her Majesty the Queen.

Ballysillan parishioner Mr Jim Patterson said he was ‘very humbled’ to receive a Maundy purse from Her Majesty the Queen in Windsor last month.

Jim was nominated for the Royal Maundy Thursday gift by the Bishop of Connor, the Rt Rev Alan Abernethy, and was accompanied to St George’s Chapel in Windsor by this wife Rosemary, former Personal Assistant to the Bishop.

Jim was one of 93 men and 93 women to receive the Maundy Purse this year. The number distributed correlated to Her Majesty’s age.

Jim said the day at Windsor Castle had been ‘absolutely brilliant.’  “We had a bird’s eye view of the Queen all the way through the service. When she smiles her whole face lights up,’” he said.

“We were told that distributing the Maundy Money was the only job she will not let anyone else do as long as she is able, as she sees it as part of her Christian duty.”

Royal Maundy is one of the most ancient ceremonies retained in the Church of England. This year Her Majesty was accompanied by Princess Eugenie.

Monarchs including Elizabeth I have taken part in the custom, which falls on the Thursday before Easter and commemorates the Maundy and Last Supper of Jesus Christ with the Apostles.

The Queen commemorates Maundy by offering ‘alms’ to retired pensioners, who have been recommended by clergy and ministers of all denominations, in recognition of their service to the church and to the local community.

This year The Maundy Money included a £5 coin, commemorating the 200th anniversary of the birth of Queen Victoria.

Jim said the Queen moved up and down the aisle of the Chapel, personally presenting the Maundy purse to each of the 93 men and 93 women. “We were told to say ‘Thank you, Your Majesty’ and bow. The Queen said thank you back, and moved on,” Jim said. 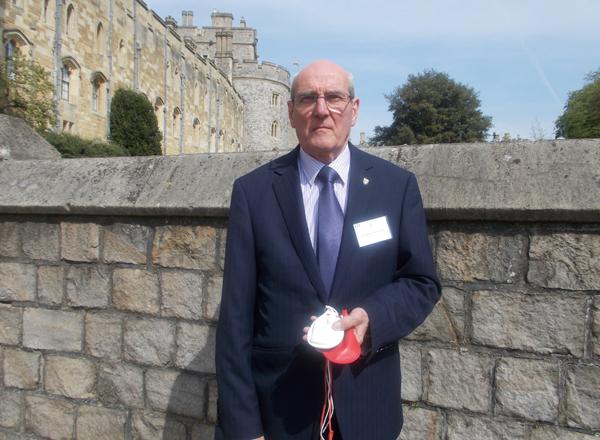 Mr Jim Patterson with the Maundy purses he received from Her Majesty the Queen at Windsor Castle.

Sitting beside Jim, Rosemary was also very close to The Queen.

“The service was awesome,” said Rosemary. “The Queen was radiant, I could not take my eyes off her. I felt very emotional when she came up to Jim to give him his money. She was beaming from ear to ear. She was beautiful.

“The service was very moving, something I will never forget. The choir sang Zadok the Priest and it gave me goosebumps.”

Following the service in the Chapel, all the recipients were invited to the State Apartments at Windsor Castle for a reception. As it was a sunny day, Rosemary and Jim opted to walk to the castle through the gardens rather than take a shuttle bus. They spent a couple of hours in the Castle, and saw some exhibits, including the dresses worn by Princess Eugenie and Princess Beatrice at Eugenie’s wedding held in St George’s Chapel last October.

When he nominated Jim for the Maundy Money, Bishop Alan said Jim’s commitment and faithful service to St Mark’s over 40 years could not be overestimated.

“He and Rosemary remained in their community during a very tumultuous period of the Troubles in Northern Ireland.  They continued to live, worship, serve in St Mark’s and the diocese, and share their faith within their community,” Bishop Alan said.

Jim, 76, was baptised and confirmed in St Mark’s. He married Rosemary in the church in 1974 and they continue to worship in the parish.

Jim’s roles within St Mark’s Church have included being a member of the Select Vestry from 1966 until the present, Honorary Treasurer of the Parish from 2000 to the present, and he has been rector’s churchwarden since 2003.

In addition, Jim has also held the roles of Diocesan Council member and Glebes Secretary within the Diocese of Connor and has been a member of the Church of Ireland General Synod for decades.

Jim grew up on the Upper Crumlin Road, and has never lived outside the parish boundary of St Mark’s. He began his career in the printing business with the firm of WW Cleland in Durham Street, and remained with the same company, through its many changes, until he retired in 2006.

Reflecting on the day at Windsor, Jim said: “It was very humbling in many ways. The Lord High Almoner explained to us that this was the Queen’s gift to us, that we were honouring her. This was her chance to honour ordinary people.”

He added: “Thousands of people have done more than I have done. It was just fortunate that Bishop Alan picked me out of a number of others he could have chosen.”

Another recipient of the Maundy money was Mrs Mary McGrath who was also nominated by Bishop Alan, with the help of Roman Catholic Bishop Noel Treanor, as Bishop Alan wanted to reflect the excellent relationship that exists between the Diocese of Connor and the Diocese of Down and Connor. Mary, originally from the Falls Road, now lives in Randalstown, and has served the Apostolic Work Society for more than 50 years.