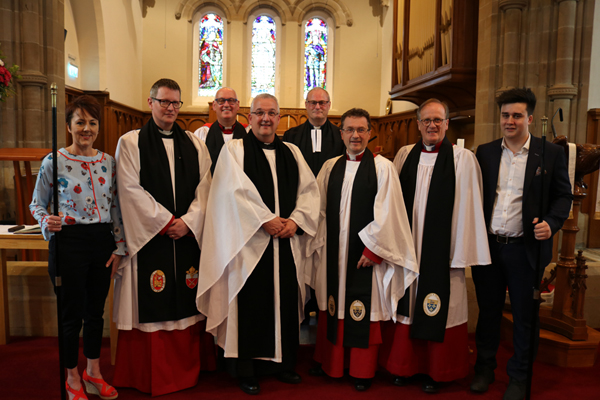 There was standing room only in the Church of St John the Baptist, Portstewart, on Friday May 10 when the Rev Malcolm Ferry was instituted as rector of the Parish of Agherton.

Malcolm was previously rector of St Augustine’s Parish Church, Diocese of Derry and Raphoe, and a Canon of St Columb’s Cathedral, Londonderry.

He served his first curacy in Agherton following his ordination in 1996, and says he has many happy memories of the parish.

He was instituted rector on Friday by the Ven Paul Dundas, Archdeacon of Dalriada, and Commissary to the Bishop of Connor. The preacher at the service was the Ven Robert Miller, Archdeacon of Derry.

Malcolm is married to Carol and they have three grown up children, James, Sarah and Rebekah.

Brought up in a large family in the Parish of Donaghmore, Armagh Diocese, he attended St Michael’s Church in the village of Castlecaulfield. He was a member of the Boys’ Brigade and taught Sunday School. He graduated from Stranmillis College, Belfast, and taught for two years before taking a position in industry.

Through the fellowship of vocation in the Diocese of Armagh, Malcolm entered Church of Ireland Theological College and after ordination was appointed as Curate Assistant in Agherton.

Following his first incumbency in Kilwaughter and Cairncastle with Craigyhill in the Diocese of Connor (1999-2003), he moved to the Diocese of Derry and Raphoe, where he was rector in Castlerock with Dunboe and Fermoyle, (2003-2008); and Clooney with Strathfoyle (2008-2014), before moving to St Augustine’s.

Looking ahead to his new role in Portstewart, Malcolm said:  “We have many happy memories and Agherton Parish was formational for me in my ministry.

“I am delighted to be going ‘back home’ to the town and people of Portstewart.  Agherton Parish was a place of great generosity and diversity and with that came many unique and rewarding opportunities – I look forward, with the people of the parish, to the challenges and opportunities yet to come and we journey forward with God.”

Malcolm’s interests include music, football and enjoying the company of good friends!