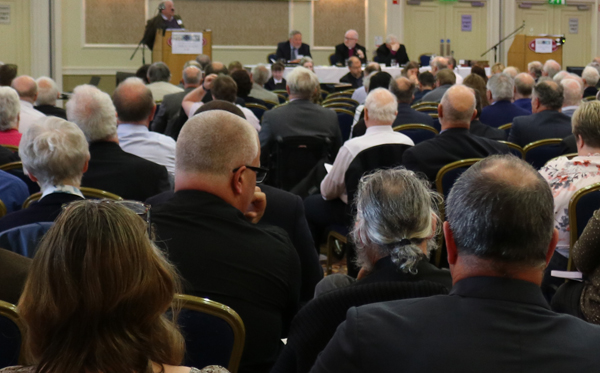 By the Honorary Secretaries of the General Synod

This year’s Church of Ireland General Synod will take place in the Millennium Forum, Derry/Londonderry, between Thursday May 16 and Saturday May 18.  This is the second ordinary meeting of the 51st General Synod and the Primate of All Ireland, Archbishop Richard Clarke, will preside over the meeting.

Please note that the General Synod Service of Holy Communion will be held in St Columb’s Cathedral at 10.30am on Thursday, 16th May.  The preacher will be Bishop Ferran Glenfield and a collection will be taken for Bishops’ Appeal.

Information on parking, public transport and accommodation is available at http://bit.ly/2VqGhLp

A reception for members of General Synod will be held in the Guildhall on Thursday evening following the close of business.  The opening and closing prayers on each day will be led by the Synod Chaplain, the Revd Robert Boyd.

St Augustine’s Church, on the Walls of Derry, will provide a light lunch at 1pm on Thursday and Friday afternoons.  The church will host the Council for Mission’s mission breakfast at 8am on Friday morning; Dr William Olhausen will speak on proclaiming the Good News of the Kingdom.  Silent prayer will also take place at St Augustine’s on Friday and Saturday mornings, also from 8am.

By the closing date for circulation, the Honorary Secretaries had received three Bills for consideration by the General Synod:

Following a review, the Board of Education (NI) has identified a new way forward for meeting the current and future needs of education and the Church.  To this end, a motion to update the Board’s definition and remit in the Constitution will be brought before General Synod.

The Representative Church Body report will note that during 2018, the total funds available to the RCB decreased by 7.5% to €179.3 million (from €193.9 million).  Total expenditure from the General Funds and other central funds decreased from €7.2 million to €7.0 million.

Significant matters dealt with by the Standing Committee included the establishment of a Working Group on Synodical Representation and a special all-day meeting of the Standing Committee to discuss its work, the establishment of a Consultative Group on Disability, and the approval of a conflict of interest policy for parishes and Church of Ireland bodies and committees.

The Board of Education (RI) has liaised with government in relation to a wide range of issues, including school admissions, leadership and management, and special education teaching supports.

The Bishops’ Appeal and the Council for Mission will present the findings of a scoping study, approved at last year’s General Synod, to identify the gaps and overlaps in the Church’s response to justice issues.