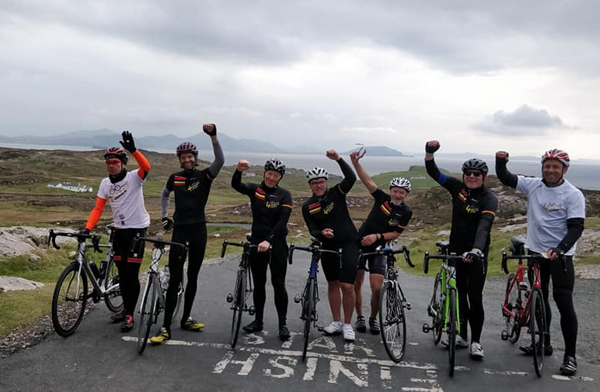 The team from the Hub at the finish line at Malin Head – after completing 400 (and 50) miles for Uganda!

The hardy cyclists from the Hub Chaplaincy at Queen’s University have to date raised £16,000 for Abaana and Waakisi thanks to their mega cycle from Mizen to Malin Head.

The team was supported by Carol Turner, wife of Alec and mum of James, who drove the support vehicle. They were also joined on part of the route by Armagh man Johnathan Hull and Barry’s old university friend Andrew Campbell.

In total the team cycled some 450 miles over the four days. Barry said:

“Along the way we were richly blessed, and literally fuelled, by amazing hospitality. We had contacted dioceses and parishes en route to see if we could call in on our way through. It was such a privilege to see how the Church of Ireland could work together the length of the whole island.”

They made it to the end with no bumps or bruises (unless you count ‘sensitive backsides’) and just one puncture. Barry said the ‘hairbrained scheme’ was completed with a profound sense of gratitude.

Funds raised will go to the two charities, which work with children and young women in Uganda, and at the end of May a team from the Hub will travel to Uganda to support Abaana and Waakisa projects there.

Barry will reflect fully on the Mizen to Malin cycle, and the work that inspired it, in the summer issue of the diocesan magazine, Connor Connections, due in parishes in the middle of June.