Arthur and George cycle around Connor for Kenyan church! 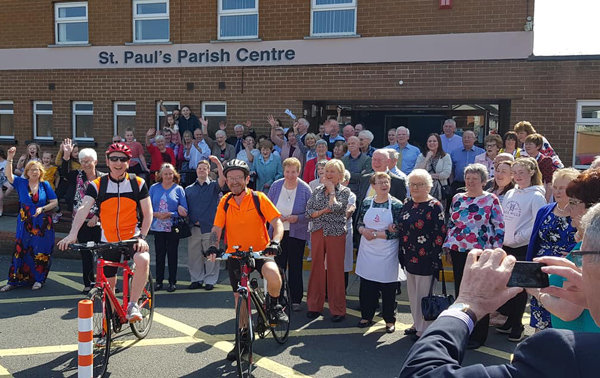 St Paul’s Parish sees the Rev Arthur Young and fellow cyclist George Irwin off in style after a parish lunch on Easter Sunday.

The Rev Arthur Young and People’s Glebe Warden at St Paul’s Parish Church, Lisburn, headed out for a spin on their bikes over Easter – and called at (virtually) every church in Connor Diocese!

Arthur and George Irwin covered 386 miles, all within the Diocese of Connor, over six days to raise funds for a church in the Diocese of Kajiado, Kenya, which St Paul’s is in partnership with.

It took just three months to plan this pedal round the diocese – and everywhere in-between – and a large crowd of parishioners saw the dynamic duo off after a Parish Lunch on Easter Sunday. 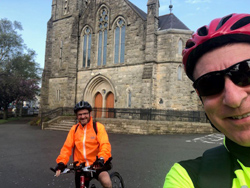 One of 106 photo stops at churches en route!

The lunch itself raised £500, and the cycle brought in £4,000. In total, the parish is aiming to raise £20,000 before a 12-strong team visits Kenya in August 2020 to paint the church which was built with funding from St Paul’s, and work on an adjacent accommodation block which houses theological students.

Arthur and George were blessed with sunshine for most of their cycle – amazingly they were only caught in two showers over the six days.

They visited a total of 106 churches – there were a couple in rural areas they didn’t manage to locate.

“We just pulled up outside and took photos to prove we had been there, because our time was limited and we needed to stick to our schedule,” Arthur said. 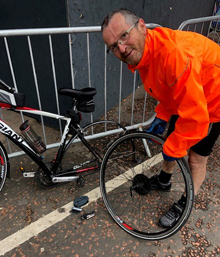 George is forced to stop to mend a puncture.

On their first day they called at churches in Lisburn and Belfast; day two began in Kilroot and took them up the coast road through Glenarm and Carnlough to Ballymena; day three was spent pedalling around the Kells, Randalstown and Ballymoney areas; day four took them to Ballycastle, Rathlin and the north coast; on day five they headed to Antrim and Ballyclare; and their final day brought them back to Lisburn via north Belfast and Lambeg.

The weather meant they suffered sunburn rather than windburn, and they only had two punctures to repair en route!

The hills proved the greatest challenge, Arthur said. “Around Larne, the hills were awful, and around the Glens. Our last day was really tough. We only visited six churches that day, but the route was very hilly.”

George only took cycling up last year, but Arthur did a similar cycle around the churches of Down and Dromore in 2010 when he was rector of Tullylish Parish. “It was something the whole parish was very excited about and really got behind,” he said. Arthur is also a keen runner and will be competing in the Lisburn Half Marathon in June. 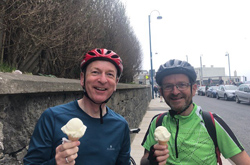 A well earned ice cream (among many!)

Visiting more than 100 churches in the course of the cycle meant there was quite a bit of stopping and starting.  “But there were also quite a number of long stretches,” Arthur said. “Like the section from Kells to Randalstown all along country roads that never seemed to end!”

To date St Paul’s has raised £9,000 towards its £20,000 target for the church in Kajiado. Arthur will travel to Kenya as part of the team in a trip co-ordinated by CMS Ireland. “I have been to South Sudan before, but this will be my first time in Kenya. The people of St Paul’s are very passionate about this link,” he said.

Fundraising continues on Friday May 24 when the parish holds a Vintage Vehicle Rally in the church grounds, running from 7pm-9pm. Everyone welcome. 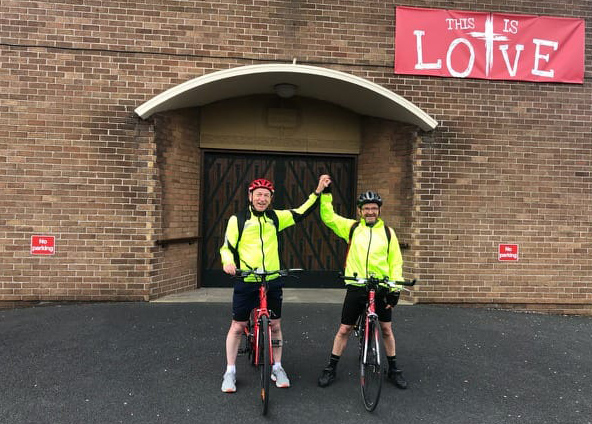 And they made it! Arthur and George celebrate the end of their 386 mile cycle back at St Paul’s.