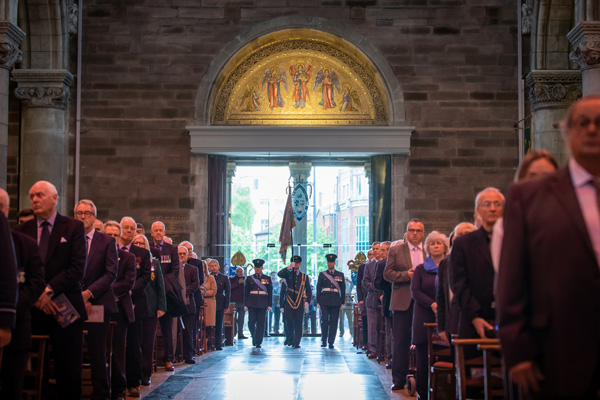 Young lives lost in the service of their country were remembered and honoured as the RAF Volunteer Reserve unveiled a memorial plaque in Belfast Cathedral on Sunday May 19.

The service was attended by veterans and by senior figures in the Royal Air Force, including Air Vice-Marshal Harv Smyth, and RAF Chaplain-in-Chief Venerable (Air Vice-Marshal) John Ellis QHC, who preached.

The service, on the 100th anniversary of the founding of the  founding of the RAF Benevolent Fund, included the unveiling of the Roll of Honour for the pre-World War II Royal Air Force Volunteer Reserve & the Receiving of the new No 502 (Ulster) Squadron Standard.

A unit of the Royal Air Force Volunteer Reserve (RAFVR) was formed in Belfast in January 1939, under the command of Wing Commander HG Gauntlet who had been a Colonel in the British Army during World War One. 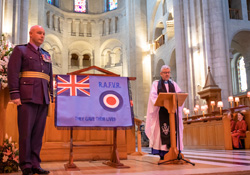 Unveiling of 502 Sqn Roll of Honour at St Anne’s Cathedral.

The RAFVR in Belfast was established to support the rapid expansion of the pilot and navigator establishment necessary for the emergency in 1939.

Aircraft manufacturer Short & Harland was invited by the Ministry of Defence to operate a training school at Belfast Harbour Airport. The school, opened in January 1939, became known as No 24 Elementary & Reserve Flying Training School (E & RFTS).

The school was exclusively used for the training of RAFVR and was equipped with the De Havilland Tiger Moth and Hawker variants including the Hind trainer, Audax and Hart.

The Reservists had been educated at grammar schools or technical colleges and came from all walks of life and social backgrounds. They all had a desire to fly, and there was no shortage of volunteers.

The Northern Ireland RAFVR had a basic programme twice a week at the RAFVR Headquarters at Saxone House in Donegall Place, Belfast, with weekend flying training at No 24 E& RFTS at Sydenham. 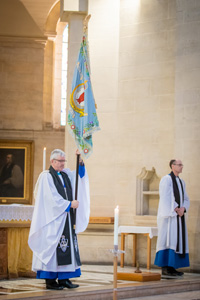 More than 300 young men joined the RAFVR between January 1 1939 and May 1 1940. On September 3 1939, 140 of them were called to full time service and posted to various RAF stations in England for further training.

Many of these young men could not drive a car or ride a motorcycle but within six months of advanced training were flying Lancaster bombers or Spitfire fighters over enemy held territory. Sadly 92 of them were killed in action, some during the Battle of Britain. Forty eight survived.

The Roll of Honour unveiled on May 19 honours those who joined the RAFVR between January 1 and August 31 1939.

The service in the Cathedral was led by the Dean of Belfast, the Very Rev Stephen Forde. After the singing of the first hymn, the No 502 (Ulster) Squadron Standard was received.

The first Lesson, from Samuel 17:40-49 was read by historian Mr John Hewitt, who has researched the names to be included on the Memorial.

During an Act of Remembrance, the RAF Band played a Lament. The Ode of Remembrance was recited by Lawrence Haynes, Chairman of the RAF Benevolent Fund.

The Act of Remembrance featured The Last Post, Silence and the Reveille, after which Air Vice-Marshal Harv Smyth laid a wreath.

Dean Forde said it had been a huge honour to host the Service of Commemoration for those men who volunteered from the schools of Northern Ireland to join the RAF Volunteer Reserve.

The commemorative plaque, giving the names of all those in the RAF Volunteer Reserve who lost their lives as airmen, will now be permanently located in St Anne’s next to the plaque which was installed last year to mark the centenary of the founding of the RAF.

The Dean said the service was ‘a day of great pride for those families who have a direct link with those named on the memorial plaque.’

At Sunday’s service, a special collection was taken for the ongoing and vital work of the RAF benevolent fund, supporting RAF personnel who have sustained injury through historical and recent conflicts”

A collection of RAFVR photographs and memorabilia is currently on display in St Anne’s Cathedral, where it will remain for viewing until May 26. The exhibition includes a guitar that was signed by all the airmen leaving Ulster on a particular train to fight in the Battle of Britain. Most never returned. 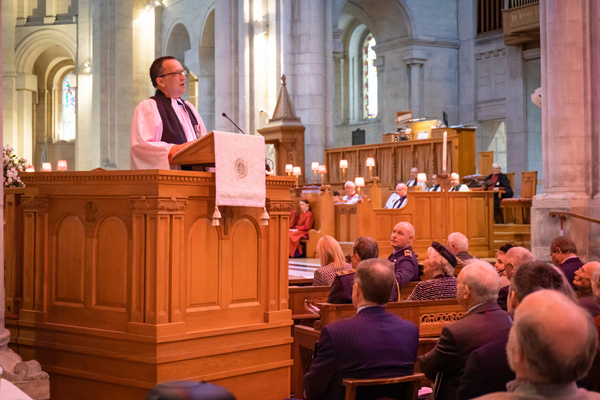