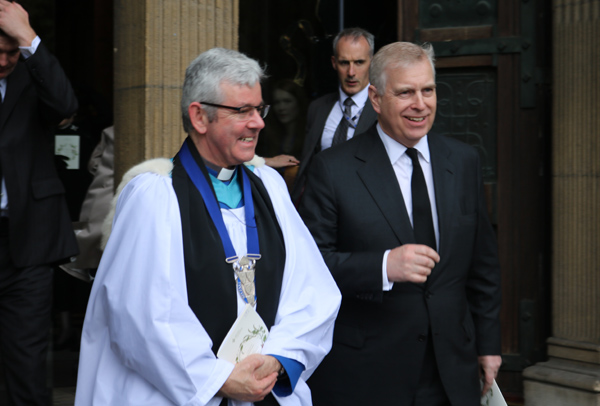 The Dean of Beflast, the Very Rev Stephen Forde, with the Duke of York who attended a Thanksgiving Service for the Duchess of Abercorn at Belfast Cathedral on May 30.

His Royal Highness the Duke of York joined the family and friends of the late Sacha, Duchess of Abercorn, at a service of Thanksgiving in Belfast Cathedral on May 30.

The Duke, who was representing the Queen and the Duke of Edinburgh at the service, was joined by other representatives of the Royal Family, including the Earl of Caledon; Viscount Brookeborough; Leonora, Countess of Lichfield and Lord O’Neill.

Sacha Hamilton OBE, Duchess of Abercorn, died on December 10 2018 aged 72.  Born in Tuscon, Arizona, she was related through her mother Georgina to Tsar Nicholas I of Russia, and was also a great-great-great granddaughter of the legendary Russian poet, Alexander Pushkin

The Duchess came to live in Ireland in 1966 when she married James Hamilton, now Duke of Abercorn. They had three children, James, Sophie and Nicholas. The family has connections to the Queen and Prince Philip and to the late Lord Louis Mountbatten.

Welcoming guests at the Service of Thanksgiving, the Dean of Belfast, the Very Rev Stephen Forde said: “She was related to royalty, yet at home with all. And through her own experience of loss through the violence of terrorism, she worked tirelessly to find healing from the trauma of ‘The Troubles’ for children and adults alike.

“But above all, Sacha was a sister, a wife, a mother, grandmother and a friend to so many present here today.

“It is for everything that she was to each of you, and all that she inspired across borders and boundaries, that today we come together to give thanks to God and to give support to one another,” Dean Forde said.

Sacha, who trained as a professional counsellor, was very aware of the trauma ‘The Troubles’ in Northern Ireland inflicted on children. To help them to express their thoughts, their feelings and to find a ‘voice’ of their own, she established the Pushkin Trust in 1987.

One of the children she reached out to was John McDaid, now a member of the hugely successful band Snow Patrol. Paying a moving tribute in front of the 800 guests at the service, Mr McDaid spoke of his close personal friendship with the Duchess, which grew from their first meeting at his school when he was 11-years-old.

“She showed me that we all have within us a universal potential,” he said. “Her dream was giant but her heart had more than enough space to nurture and grow it. She held up a light and altered the future for generations.”

The musician added that without the influence of the Duchess, he did not know if he would have done the writing he has. “If it were not for Sacha I don’t think I would trust that anyone would want to listen to what I had to say,” he said.

Mr McDaid said Sacha had given him ‘the most precious gift of all, not a voice, but the gift to use my own voice, and she listened.’

He added: “In every word, story or song that I will ever write there is something of Sacha that is alive in it.” 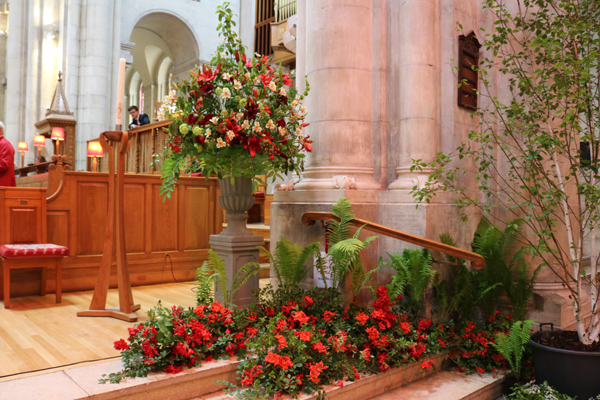 Flowers and trees from the Duchess’s home at Baronscourt adorned the Cathedral for the Service of Thaniksgiving.

Mark Patrick Hederman OSB, former Abbot of Glenstal Abbey, also paid tribute to the late Duchess. He said Sacha had been a catalyst for peace and reconciliation, and an icon of elegance, nobility and a tireless promoter for creativity.

He said her wisdom, values and ideals must be nurtured and maintained by the Pushkin Trust, which has inspired more than 50,000 children from 28 of Ireland’s 32 counties.

After the Omagh bomb in 1998, the Duchess became a trustee of the then Northern Ireland Centre for Trauma and Transformation. In 2003, she received an honorary doctorate from the University of Ulster. In 2006, the Ireland Fund of Monaco presented her with the Princess Grace Humanitarian Award, and she was also awarded the OBE in 2008 for her services to charity.

Dom Hederman made reference to the trees and flowers that decorated the Cathedral for the service. They came from Baronscourt, ‘the place on earth she loved the most,’ he said, adding that the original saplings had been brought to Baronscourt by Sacha from Pushkin’s grave.

Music at the service was led by the Belfast Cathedral Choir and Londonderry choir Codetta, directed by Donal Doherty. Organist was David Stevens and Trumpet Players were Pamela Stainer and Patrick McCarthy.

The music included the Rachmaninov ‘Bogoroditse Devo’ sung by the Cathedral Choir and a setting of ‘Aedh wishes for The Clothes of Heaven,’ sung by Codettta.

The renowned classical pianist, Christian Blackshaw enthralled the congregation with his playing of a Schubert Impromptu.

Jamie Hamilton, eldest son of the Duchess, read ‘The Otter’ from his mother’s book of poems ‘Feather from the Firebird,’ and Timothy Knatchbull, Lord Mountbatten’s surviving grandson from the Sligo assassination and author of ‘Out of Clear Blue Sky,’ read from the 1 Corinthians, Chapter 13. Tatiana and Nicholas Hamilton read an excerpt from André Chénier, in Russian and in English.

Prayers were led by the clergy and ministers of Baronscourt, Rev Sam Livingstone, the Rev Jonathan Cowan, the Rev Ivan Dinsmore and by the Rev Tim Close of the Cathedral staff.

Following the service guests enjoyed refreshments in the Nave of St Anne’s Cathedral.