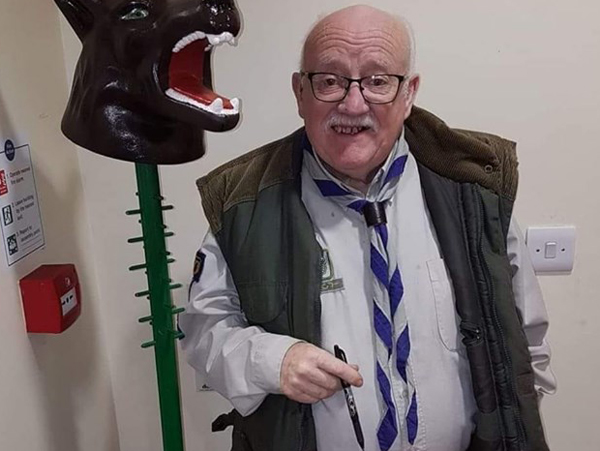 Congratulations to 81-year-old Billy Sholdis, a parishioner of St Matthew’s Parish, Belfast, who has been awarded an MBE in the Queen’s Birthday Honours.

His award is for his dedication to Scouts in the North West Belfast District. Billy, who has lived all his life in the Shankill area, joined the Scouts as a Cub when he was eight, and, in his own words, ‘never really left.’

Even when he had to officially retire at 65, he continued to help out, and when rules changed he renewed his commitment and is now assistant scout leader of 20th North and West Belfast Scouts.

“I went through the ranks, starting as a Cub when I was eight, and when I finished I began to lead the Cubs,” Billy said. The Scouts meet in a hall in Bray Street – they moved into the original hall – which had been used by the ARP – after the war. That hall was replaced, and then replaced again.

Nowadays, Billy walks the short distance from his home off the Woodvale Road to the hall every morning.  “I am what they used to call the unofficial caretaker,” he said. He returns on Monday nights for Scouts, on Tuesday nights for Cubs and on Wednesday nights for Beavers and Squirrels.

Billy, who never married, worked as a cobbler with Rogan Bros in Shankill Road, before moving to the Belfast Corporation of Libraries. He was later a gardener in Woodvale Park before retirement.

When he first learned he was to receive an MBE he could tell no one. “I was sworn to secrecy,” he said. “When it was announced at the weekend I was at Scout Camp in Crawfordsburn, and one of leaders came running up with his phone telling me it was on Facebook that I was getting an MBE.

“The Scouts were over the moon. People keep stopping me on my morning walk to the hall, and the phone hasn’t stopped ringing.

“I have been doing this for such a long time I never thought about anything like awards. My reward was organising activities for the kids in the district.”

But Billy said he was very honoured to receive the MBE and is looking forward to a trip to Buckingham Palace later in the year.