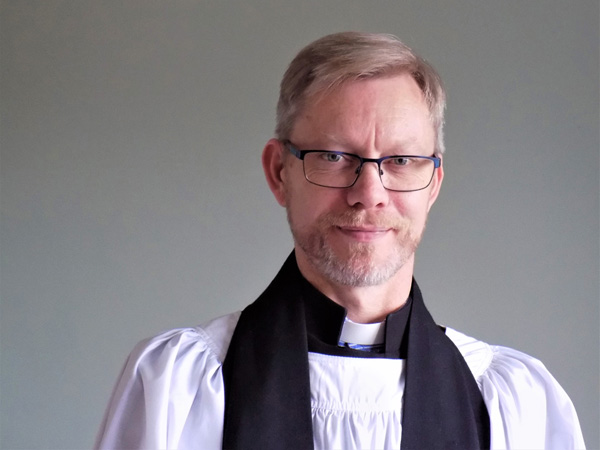 The Rev Aaron McAlister, curate at Antrim Parish, has been appointed rector of Derriaghy.

Aaron, 46, is married to Melanie and they have two children, Jacob and Ellie.

Aaron worked for 20 years in the DVA in Motor Taxation, and was commissioned as a Diocesan Lay Reader in December 2007.  He gained a professional certificate in ministry in 2012 from the University of Chester before completing two years of training at Theological College in Dublin. Aaron was ordained a deacon in 2015.

Aaron also did a one month placement with Bishop Justin Badi Arama, Diocese of Maridi, South Sudan.  He worked for a year with the united parishes of Billy and Derrykeighan with Rev John Anderson (incumbent) as a year out from Theological College.

His third year intern placement was as deacon at Holy Trinity, Portrush (Ballywillan).

Following ordination, Aaron served as curate assistant in All Saints’ Parish Church, Antrim, with the vicar, the Ven Dr Stephen McBride. “I’ve learned a great deal from Archdeacon McBride, and he has supported me in all my endeavours in my time in Antrim.  I will miss working with him,” Aaron said.

His hobbies include Playstation, photography, reading, Star Trek, and ‘mostly coffee!’  He says his sporting endeavours are generally limited to the Wii, so Aaron and Melanie go walking for fitness.

“Melanie and I are sad to leave Antrim of course,” Aaron said.  “We’ve built up many good friendships and don’t intend on losing them.  My greatest blessing has been to build up God’s people and start from scratch a youth group called Next Steps.

“However, I look forward with excitement and anticipation to the next chapter as the rector of Christ Church, Derriaghy, and St Andrew’s, Colin, and to discovering how I am to serve God and the parish.”

No date has yet been set for the institution service.