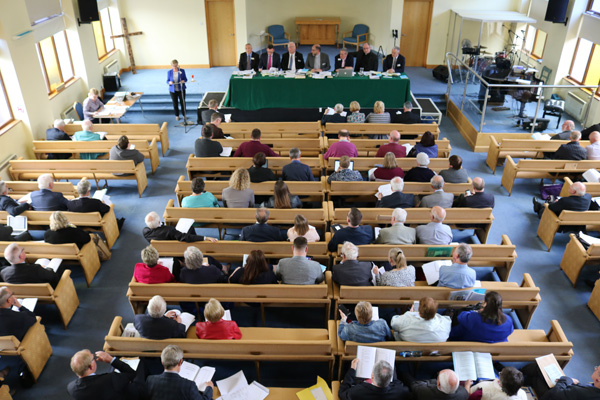 The Bishop of Connor, the Rt Rev Alan Abernethy, was remembered in prayers at the annual Synod of the Diocese of Connor, held in Ballymena on June 13.

Bishop Alan, who is currently undergoing treatment for prostate cancer, sent greetings to the Synod in the form of a video, played in place of his presidential address.  In it, he spoke about his treatment, thanked the people of diocese for their prayers, and paid tribute to his three Archdeacons, who have taken turns to act as Commissary.

Synod was chaired by the current commissary, the Ven George Davison, Archdeacon of Belfast.

The minutes of the last Diocesan Synod were agreed, and the Rev Canon William Taggart, Registrar, outlined communications from General Synod.

Tributes were paid to the late Dean Fred Rusk and the late Archdeacon Albert Duncan, both having passed away in recent months. Mr Jim Neil said that they had each given many years of service to the diocese.

Dean John Bond was welcomed as the new Diocesan Curate, following the retirement of Canon Ken Ruddock.  Archdeacon Davison said: “We recognise how big a task it is and it needs someone with the depth of knowledge of the diocese and parish to take this on.”

The Report of Diocesan Council and Associated Motions were proposed by the Rev Jonny Campbell-Smyth and seconded by Mrs Andrea Cotter.

Many speakers paid tribute to the Diocesan Development Team, including the Rev Andrew Campbell, Skerry, Rathcavan and Newtowncromellin, who made particular mention of Youth Officer Christina Baillie and her team for the support they had given the parish. The Christmas Cracker outreach event last December had, he said, ‘empowered our young people towards mission, and on the back of that we have several young people counting the days until Summer Madness and Connor Takes the Castle.’

“The support and resources we as clergy have on offer are invaluable as we seek to serve our Lord Jesus Christ in mission,” Andrew said.

Archdeacon Paul Dundas, rector of Christ Church, Lisburn, praised the team for activities including Summer Madness, Streetreach, the ‘Journey’ resource and the All Aboard programme, and said that parishes should also be interested by the Transforming Lives for Good (TLG) project to work with schoolchildren needing extra support.

Paul said Patrick’s Mysterious Adventures, staged in Christ Church Parish, had been a clear presentation of the story of St Patrick and his Christian faith, and had passed that message on to hundreds of children and adults. He paid tribute to Connor Children’s Project Development Officer Jill Hamilton, Sister Karen Webb from the North Belfast Centre of Mission, and his curate the Rev Derek Harrington for putting the event together, adding that the drama group Play it by Ear had had a great impact.

The Rev Tracey McRoberts, rector of St Matthew’s and Mid Belfast Rural Dean, said Connect Base, the North Belfast Centre of Mission, had made a real difference in the area. “It has brought cohesion to parishes through blessing, encouragement, support and a listening ear,” she said.

Christina Baillie thanked those who serve on the Diocesan Youth Council, and encouraged others to get involved, and the Rev Philip Benson, Chair of the Youth Council, said that he would like to see more parishes sending young people to the various youth events.

Archdeacon Davison thanked the entire diocesan team. “We owe them a huge debt of gratitude,” he said.

Mrs Kathleen Rodgers took the opportunity to speak about the Orphans and Children’s Society, which she said had supported some of the activities organised in Connor, but appealed for more applications for funding from across the diocese.

Archdeacon Davison made a presentation to the Rev Canon Will Murphy, who has retired as Diocesan Director of Ordinands (DDO) after 27 years, and new DDO the Rev Canon Kevin Graham encouraged delegates to support Vocation Sunday (September 13) and played a video which has been made to generate interest in vocation (featuring, among others, Lisburn Cathedral curate the Rev Danielle McCullagh).

Before the end of the discussion around the Diocesan Council Report, Archdeacon Davison expressed gratitude to Lay Readers who, he said, do a tremendous job.

There was a presentation from PSNI Chief Superintendent Simon WAlls on the Scamwise NI project to protect people from being scammed. A full report will be posted separately.

Business was suspended as delegates enjoyed a lovely meal in St Patrick’s Parish Hall – thanks were expressed to all those who had provided the dinner.

Back in the Synod Hall, Dean Stephen Forde took the opportunity, in relation to reports submitted to synod by both Belfast Cathedral (St Anne’s) and Lisburn Cathedral, to encourage people to consider coming along to St Anne’s for Choral Evensong and hear ‘a top class choir in a beautiful place of reflection.’

Synod agreed a motion proposed by the Rev Amanda Adams that the partnership with Yei Diocese in South Sudan be continued for two years from 2019 (full report on this to follow).

The evening continued with a keynote speech by Phil Potter, retired Archbishop of Canterbury’s Missioner and Leader of the Church of England Fresh Expressions Team, on the topic ‘A Heart for Mission.’ You can download PHIL POTTER’S TALK.

This was followed by discussion and questions.

Earlier in the day, a Service of Holy Communion was held in St Patrick’s, Ballymena.