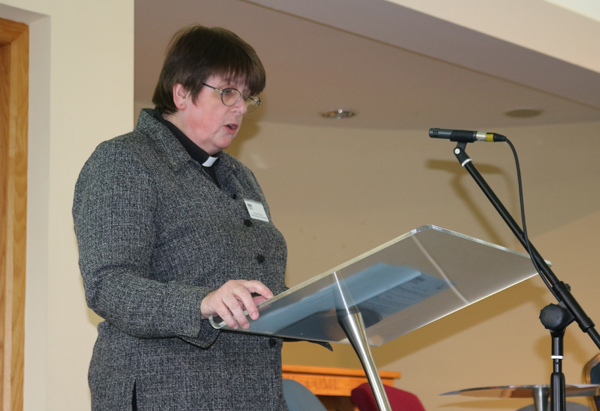 The Rev Amanda Adams, rector of Ballyrashane and Kildollagh, proposes extending the partnership with Yei at Connor Synod.

Connor Diocese is to extend its partnership with the Diocese of Yei, South Sudan, for a further two years.

The continuing partnership with Yei, which began in 2007, was proposed at Diocesan Synod in Ballymena on June 13 by the Rev Amanda Adams, rector of Ballyrashane and Kildollagh.

But Amanda said that the most significant thing about the partnership was the building of relationships. “This is not about charity, it is about friendship in Christ,” she said.

Amanda and a team from Ballyrashane and Kildollagh travelled to a Peace and Reconciliation Conference held in Arua, Uganda, last October. This was attended by CMSI partner Bishops and representatives from South Sudan. It took place in Arua because of the ongoing insecurity in South Sudan.

“The focus is not on rebuilding infrastructure, but on what the Church does best, rebuilding lives. Friends give the greatest gift they can – their undivided consideration, and in giving, they are receiving. That is partnership.”

Amanda said the Bishop of Connor, the Rt Rev Alan Abernethy, had sent funding from the Diocese of Connor with her to pass on to Bishop Hilary of Yei. 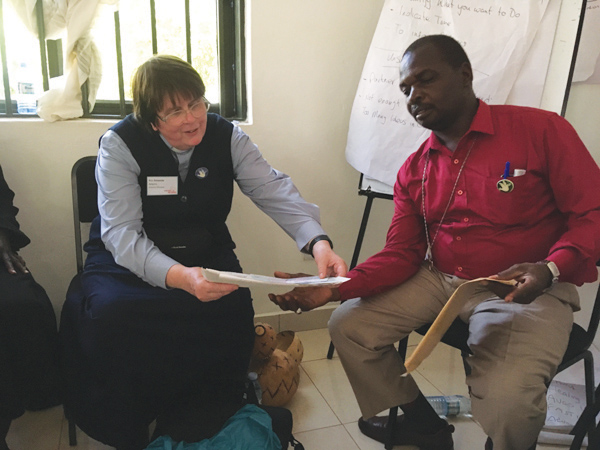 The Rev Amanda Adams at work at the Peace and Reconciliation Conference in Arua, Uganda, last October.

“That cheque will pay for the schooling of 40 orphaned children for three years,” Amanda said. “Bishop Hilary was overwhelmed, and said the children who benefit will now be known as the ‘Bishop’s Children.’

“He said these were tangible signs of one part of the body of Christ reaching out to another.”

Reflecting on her visit to Rhino Camp, the largest of the camps on the Ugandan border housing South Sudanese refugees, Amanda said it had been ‘deeply humbling’ to be with people who did not know what their future held, but were still able to worship with all their heart and sing ‘God is good.’

Seconding the proposal to extend the partnership, Archdeacon Paul Dundas, rector of Christ Church, Lisburn, said it was apparent how the visit to Arua had impacted Amanda and her parish.

The Archdeacon recalled his own visit to the Bishop Allison Theological College (recently relocated back to Yei) in 2000 when it was based in Arua due to the civil war.

“We were amazed that students travelled hundreds of miles from South Sudan to Arua to study, and then returned to serve the Master in a war torn land for no pay,” he said.

“You can see the people’s commitment to Christ, and we are delighted to continue to develop the partnership for the next two years.”

Dennis Fullerton from Lisburn Cathedral, visited Rhino Camp with a team from the Cathedral in April 2018.  “We were able to say, ‘we have not forgotten you,’” Dennis told Synod.

Bishop Alan and a team from Connor were in Yei Diocese in 2013. A trip planned for the following year had to be cancelled due to the outbreak of yet another civil war. The 2013 trip was full of teaching and joyful worship, as can be seen in the video below.