Greater risk of losing money to scammers than burglars 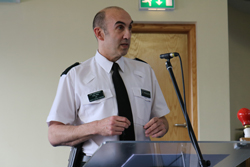 Delegates at Connor Synod who began listening to a talk on scams, confident they would never fall victim to one, probably felt rather less comfortable when Chief Superintendent Simon Walls finished his presentation.

For the PSNI officer outlined a variety of sophisticated scams, which, along with the traditional cold calls on the phone or mail bombardments, cost people in Northern Ireland a total of £1.7 million in the six months before March.

Chief Superintendent Walls said that the previous week, one person had been scammed out of £500,000!

And there could be more victims, as many people are embarrassed to admit they have fallen for a scam.

“You do not need to be old, naïve, greedy, stupid or reckless. There is a scam with every one of our names written on it,” Chief Superintendent Walls told Synod.

Recently, The Church of Ireland – alongside the other main Churches – announced it was backing the Scamwise NI campaign to keep people in Northern Ireland safe from scams.

Chief Superintendent Walls said that Scamwise was the largest of all the crime reduction partnerships in Northern Ireland, and involved very diverse groups, including charities, banking, faith and youth groups.

The initiative aims to raise awareness of Scams, to give victims a voice, to allow those who perpetrate scams to speak. 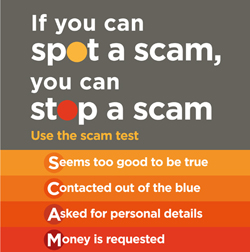 He outlined a number of common scams: Calls/ emails from HMRC saying you owe money; an email purporting to be from a TV Licence detector; a message to say your internet is about to crash and you must download a link immediately; a call allegedly from Fraud Squad warning you your bank account has been compromised and you must move your money immediately; internet messages saying ‘We know what you have been looking at on your computer’ and demanding payment (in Bitcoin) to prevent the scammer sharing your viewing history.

“They prey on our vulnerability,” said Chief Superintendent Walls. “They create a sense of urgency or panic, increasingly with a threat.

“There is a really potent risk out there. You are much more at risk of losing your money through a scam than through a burglary.”

He said that even for the Police, scams are difficult to detect as many scammers work outside Europe.

The Chief Superintendent encouraged people to learn the scam test, below, which can help you to spot a scam if a cold caller gets in touch:

Chief Superintendent Walls said anyone who thought they might be a victim of a scam should get in touch with the PSNI by ringing 101 as all information will help gather intelligence on the scammer.

The Scamwise test is being shared widely throughout the Church of Ireland.

Commenting on its launch earlier this year, the Archbishop of Armagh and Primate of All-Ireland, the Most Rev Dr Richard Clarke, said it had been ‘shocking to learn of the sheer cynicism, deviousness and mean-mindedness that people apply into seeking to swindle others today.’

The Archbishop said that it was crucially important that everyone is aware of the dangers of engaging carelessly online, even with sites that look safe.

“It is equally important that people do not hesitate to contact the PSNI or the Gardaí if they believe that they are possibly being targeted by fraudsters,” Archbishop Clarke stated.

More information is available, in Northern Ireland, at www.nidirect.gov.uk/scamwiseni and www.facebook.com/scamwiseni.