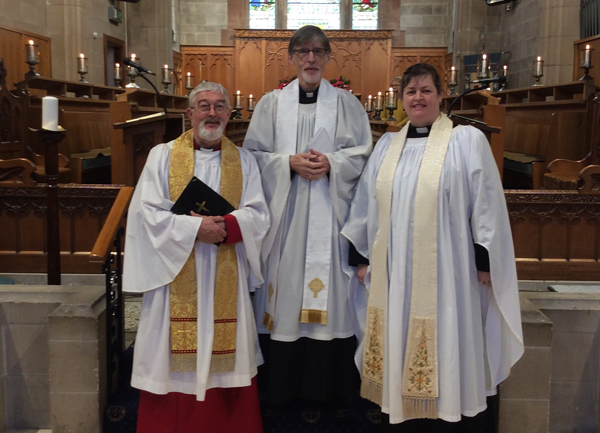 The Rev Clifford Skillen (centre) is pictured following a recent celebration of Choral Eucharist in St Polycarp’s, Finaghy, to mark the 30th anniversary of his ordination. He is accompanied by Canon John Budd (preacher) and the Rev Louise Stewart, rector of Finaghy and Upper Malone. Mr Skillen was rector of Finaghy from 1996-2009.

The Rev Clifford Skillen marked the 30th anniversary of his ordination at a celebration of Choral Eucharist in St Polycarp’s, Finaghy, on Sunday June 16.

After his retirement from Finaghy, he served for two years in Derriaghy with the Rev Canon John Budd as assistant priest. He has been Senior Domestic Chaplain to the Bishop of Connor since 2007.

Clifford was assistant editor of The Church of Ireland Gazette from 1999-2015.

He served for four years as secretary of the Retired Clergy Association (NI) and remains a member of the committee.

He is currently endeavouring to keep up-to-date the Connor Succession Lists of Clergy since 1992, building on the groundwork done by Canon Edgar Turner before he died.

Preacher at the 30th anniversary service in St Polycarp’s, Finaghy, was the Rev Canon John Budd.