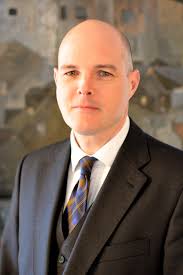 The Dean and Board of Belfast Cathedral has announced the appointment of Prebendary Matthew Owens as Director of Music at St Anne’s in succession to Mr David Stevens.

Matthew has a long association with Northern Ireland through his wife, Ali, whose family is from Whitehead in County Antrim.

Matthew was educated at Chetham’s School of Music; The Queen’s College, Oxford; the Royal Northern College of Music; and the Amsterdam Conservatorium. He won all the major prizes in the diplomas of the Royal College of Organists, as well as the Silver Medal of the Worshipful Company of Musicians.

His career appointments include Tutor in Organ Studies at the RNCM and Chetham’s, and working for BBC Religious Broadcasting (1994-99); Sub Organist of Manchester Cathedral (1996-99), and Organist and Master of the Music at St Mary’s Episcopal Cathedral, Edinburgh (1999-2004). He also served as President of the Cathedral Organists’ Association (2010-13).

Since 2005, Matthew has been Organist and Master of the Choristers at Wells Cathedral where, in addition to being responsible for daily sung worship, he has toured, broadcast, and recorded extensively with the cathedral choir. In 2011, the choir was named by an international jury for Gramophone as the best choir in the world with children, and the sixth greatest overall.

Since 2005 he has also been Conductor of the Wells Cathedral Oratorio Society, a chorus of over 150 singers. Matthew is the Founder Artistic Director of three initiatives at Wells: Cathedral Commissions, a scheme which commissions new works from pre-eminent British composers; the cathedral’s innovative festival, new music wells; and its counterpart, Early Music Wells.

He has guest conducted, among others, the London Mozart Players, English Symphony Orchestra, Southern Sinfonia, Scottish Ensemble, Nash Ensemble, Brook Street Band, and the Hungarian National Philharmonic Orchestra. He has directed choral workshops and summer schools throughout the UK and abroad – including Australia, China, Germany, Hong Kong, Luxembourg, New Zealand, and the USA. As a conductor he has made over 30 CDs with major labels. As an organist, Matthew has given recitals in Australia, France, Ireland, New Zealand, Spain, Switzerland, the USA, and throughout the UK.

Matthew has championed new music, particularly of British composers, conducting over 200 world premieres, including works by leading composers ranging from Jools Holland to Sir James MacMillan, and John Rutter to Sir Peter Maxwell Davies. He is Director of the Cranmer Anthem Book (launched in October 2017); a project that will set all 92 Collects from the Book of Common Prayer to music, by some of the world’s finest composers.

As a composer himself, Matthew is published by Oxford University Press, Novello, and the Royal School of Church Music. He was made an Honorary Fellow of the Guild of Church Musicians in November 2012, and a Prebendary (Canon) of Wells Cathedral – ‘for outstanding service’ to the Diocese and the Cathedral – in October 2017.

Matthew will take up his post at Belfast Cathedral on September 1 2019.