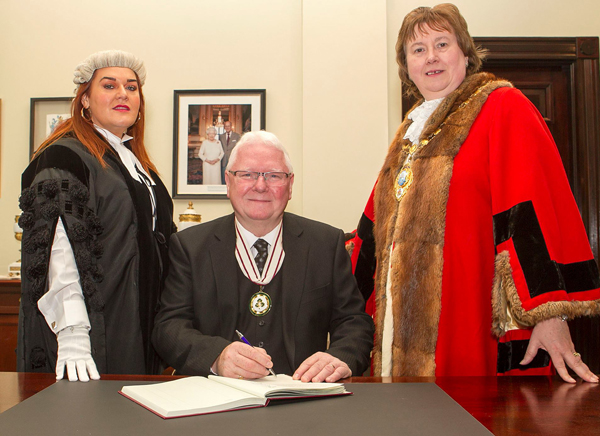 Jim’s appointment was the final commission by HM Lord-Lieutenant Mrs Joan Christie, CVO, OBE, a parishioner of Agherton Parish, who stepped down at the end of June.

Jim was awarded his MBE in the Queen’s Birthday Honours in 2017 for Services to the Community in Ballymena.

He is an active member of Ballymena Rotary Club and a major contributor to the highly successful ‘Ahoghill in Bloom’ team.

In 2016 he held the post of High Sheriff for the County of Antrim and lately served as the Clerk to the Lieutenancy of Antrim.

A lifelong member of St Patrick’s Parish Church, Jim was a bellringer for a number of years until he was appointed a Diocesan Lay Reader in 1985.

He was officially welcomed as Deputy Lieutenant for County Antrim by Mid and East Antrim Borough Council. The Mayor, Councillor Maureen Morrow, said: “Mr Perry has carried out a lot of important work in the community and I have no doubt that this will continue throughout his time in this role.

“I’m delighted Mr Perry’s first engagement as Deputy Lieutenant was in Ballymena, where he helped us mark Armed Forces Day.”