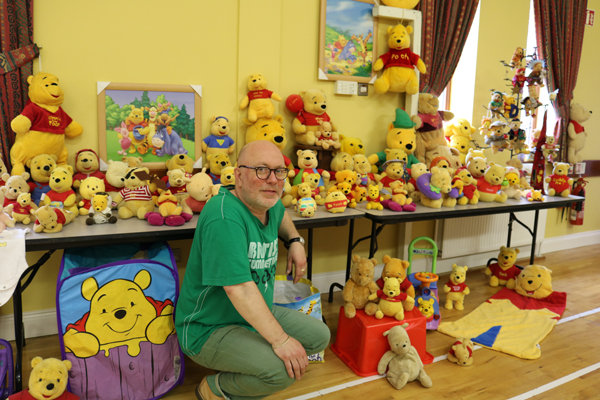 The Rev Canon Derek Kerr with a selection of items on display in the Winnie the Pooh exhibition hosted in Duneane Parish Hall in June.

A Winnie the Pooh exhibition organised by the Rev Canon Derek Kerr, vicar of Drummaul, Duneane and Ballyscullion, raised almost £1,300 for three charities.

Fields of Life, The Lily Foundation and Tiny Life all received a share of the funds donated by visitors to Derek’s amazing exhibition, held in Drummaul Parish Hall from June 21-23.

On display – and completely filling the hall – were literally hundreds of Pooh Bears, Tiggers, Piglets and Eeyores in all shapes and forms, all from Derek’s own collection.

The exhibition attracted a lot of interest from families in the area and beyond.

The parish has supported Fields of Life for many years, having raised funds for Tibero School in Uganda, and continues to sponsor children there.

Derek chose to make a donation to Tiny Life because of the charity’s support for Randalstown parishioners Robert and Claire Melville whose twins Eva and Gracie were born three months early. Now 18 months, the girls are thriving.

“It was so good of Derek to think of raising funds for Tiny Life,” Claire said. “I could not believe that his Winnie the Pooh collection would fill a whole church hall! We brought the girls along and they were able to play with some of the toys. It was very nice of Derek as Tiny Life relies on fundraising.”

Hazel and James Marks are members of Duneane Parish. Their son Alex, aged four, has Mitochondrial Disease, an illness for which there is no cure. The family is supported by The Lily Foundation, a charity which not only helps those affected by the disease, but conducts research to find a cure.

Hazel said Alex had really enjoyed the Winnie the Pooh exhibition. “Thanks to people like Derek for fundraising and raising awareness in the hope that one day a cure will be found for Alex.”

You can read more about Derek’s fascination with all things Winnie the Pooh in the October issue of the diocesan magazine Connor Connections, when we also talk to Hazel and Claire about their inspirational children.