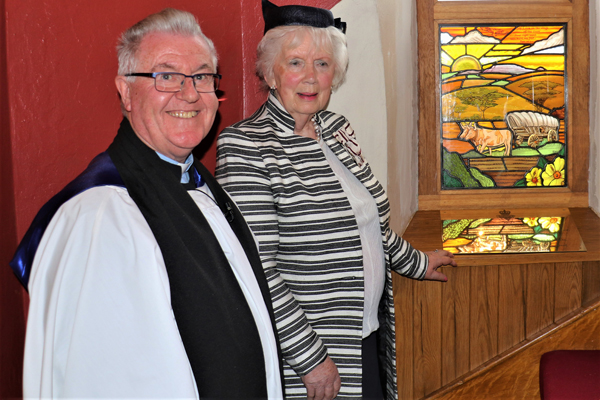 The Rev Ian Magowan and Mrs Joan Christie dedicate the window in memory of the Rev A Sydney Hofmeester in St Saviour’s, Connor.

A stained glass window and a new memorial seat have been dedicated in St Saviour’s Parish, Connor.

The window, in memory of the Rev A Sydney Hofmeester was dedicated on Sunday June 23 at the annual Thanksgiving Service for the Ulster Defence Regiment CGC and the Royal Irish Regiment.

The new stained glass window was kindly presented by The Colours & Window Committee of The Regimental Association, and was dedicated by the rector, the Rev Ian Magowan, and unveiled by The Lord Lieutenant of Co Antrim, Mrs Joan Christie CVO, OBE.

The window depicts scenes relevant to Mr Hofmeester’s early life. Originally from South Africa, he was rector of St Saviour’s, Connor, from 1962-1984.

The late Major Charlie McCartney was the instigator of this new window being installed as a tribute to Mr Hofmeester who was instrumental in bringing the Ulster Defence Regiment into St Saviour’s in the 1970s.

On Sunday July 28 the Simmons Family attended for the dedication of a new outdoor seat in memory of their parents, the Rev David Simmons, who was rector of the parish from 1951 until 1961, and his wife Hester Eileen

Towards the end of the service the rector, the family and the congregation moved outside where the seat was dedicated by Mr Magowan. 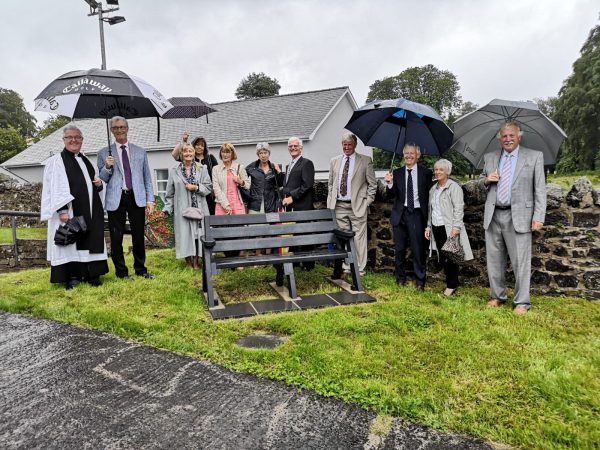 Dedication of the new seat in memory of the late Rev David Simmons and his wife Hester in St Saviour’s, Connor.