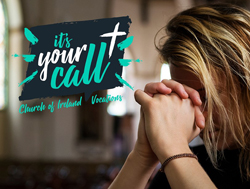 September 15 has been designated Vocation Sunday in the Church of Ireland, a day to enable the whole Church to reflect – prayerfully and practically – on how it nurtures and fosters vocations.

This will be followed up by a retreat at the Dromantine Retreat Centre, Newry, in February 2020, to give participants space and time to think about the call of God and help them to explore vocation further.

A video has been produced of interviews with clergy in contexts across the island of Ireland, focusing on the call to explore ordained ministry, their personal stories, and the opportunities which ordination presents.

Canon David Gillespie, the Church’s Central Director of Ordinands, said: “We are also keen to broaden out the conversation to take in all forms of ministry within the Church.”

The Rev Karen Salmon, curate in Willowfield Parish Church, Belfast, said that over the years a number of people suggested she should consider ordained ministry, but Karen was convinced that God had called her to Ethiopia.  During one difficult stage in her ministry as a missionary, she received a picture of a tree being pulled up by its roots, which persuaded her that God had other plans.

“This image, together with a two-page article and video links on vocation in the Church of Ireland Gazette, encouraged me to push the door to ordained ministry. God confirmed His call as I took steps forward by speaking with various people and with Him,” Karen said.

“As a teenager, I always wanted to do hotel catering and management,” the Dean of Limerick, Niall Sloane, recalled. “However, an encouraging conversation with a retired clergyman changed all that.

“The important lesson in all of this is that God calls us in all sorts of ways and to all sorts of ministries.”

Vocation Sunday is an invitation to encourage members of parishes to identify vocations in others and also to think about what God may be saying into their lives about their role in ministry and service.

Over the last decade, around two-thirds of those entering training for ordination have come from three dioceses – Down and Dromore, Connor and Dublin and Glendalough.  The Commission on Ministry senses that the ministry of the Church would be better served by a more even geographical mix of candidates.  It has been encouraged by the initial intake for Ordained Local Ministry.  The first ordinations will take place this autumn with 24 ordinands from the Republic and 18 from Northern Ireland.

“Having a Vocation Sunday in September is an ancient rather than a new idea,” the Commission’s Chairman, Bishop Michael Burrows, said.  “The Prayer Book prescribes the keeping of Ember Weeks four times in the year – these are days associated with holding ordinations and interceding about ministry.”

Philip McKinley, a member of the Commission, said: “We confidently hope that Vocation Sunday will create an atmosphere in which the call of the Holy Spirit may be better heard, and which helps to connect people with the wide range of opportunities which are available for ministry across our Church in Ireland today.”

PowerPoint slides and images for Vocation Sunday are also available at vocations.ireland.anglican.org.