Institution in Kilroot and Templecorran 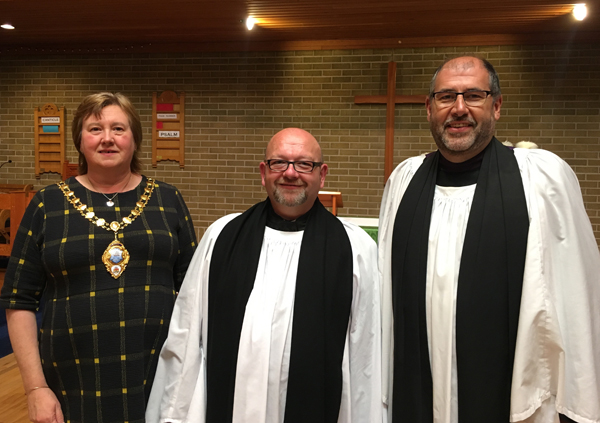 Pictured at the institution of Rev Nigel Kirkpatrick as rector of the Grouped Parishes of Kilroot and Templecorran are, from left, Councillor Maureen Morrow, Mayor of Mid and East Antrim Borough Council; the Rev Nigel Kirkpatrick; and Bishop’s Commissary, the Ven George Davison, Archdeacon of Belfast.

The Rev Nigel Kirkpatrick was instituted as rector of the Grouped Parishes of Kilroot and Templecorran at a service in St Colman’s Parish Church, Carrickfergus, on Wednesday September 4.

Nigel, 50, is married to Cristina. He was previously rector of St Dorothea’s Parish, Gilnahirk, Diocese of Down and Dromore.

He grew up in Belleek, Co Fermanagh, and moved to Belfast to work as a volunteer with the Ecumenical Youth Council in Europe which organised and facilitated international Youth Conferences and Workshops.

Nigel was appointed an intern to the World Council of Churches (WCC) Youth Department and took part in a nine-month study tour of Asia, looking at the situation of Christian minorities, and finishing at the WCC Youth Convention in Canberra, Australia, in 1991.

When he returned to Belfast, Nigel became a founder member of the Solas Community of Reconciliation, based on the ‘peaceline’ in north Belfast. He continued to do cross community work, before taking up a post of a hostel supervisor with the Grampian Adolescent Project.

Eighteen months later he followed the calling he had had from his student days, and went to Theological College in Dublin to train for the ministry.

In 1996 Nigel was ordained for St Columba’s, Portadown, where he was a curate for three years, before taking a second curacy with the Lecale Group which included Down Cathedral.

In 2001 Nigel was appointed rector of Killinchy and Kilmood Union of Parishes, moving to St Dorothea’s in 2007.  He was appointed a Minor Canon of Belfast Cathedral in 2014.

Nigel was instituted rector of Kilroot and Templecorran by the Bishop of Connor’s Commissary, the Ven George Davison, Archdeacon of Belfast, as Bishop Alan Abernethy is currently on sick leave.