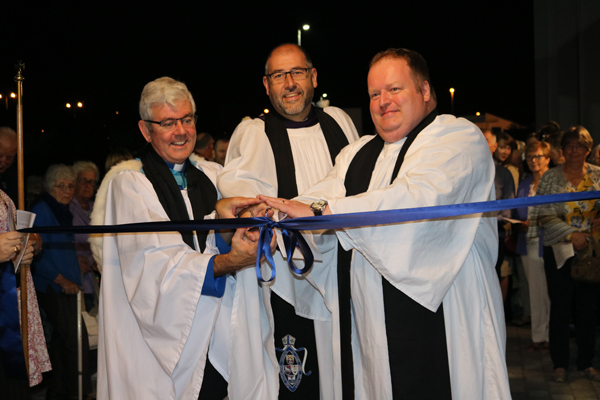 They dared to dream and on Thursday night that dream was realised as the parishioners of St Cedma’s, Larne, dedicated their brand new parish hall.

The striking and modern Inver Hall is next to St Cedma’s Church, and its official opening on September 19 marked many years of planning, negotiations, the buying and selling of property and a huge amount of concerted fundraising.

Anne Marcus, honorary secretary, said: “Fifteen years ago it became clear that the existing parochial hall on the Curran Road was quite literally beginning to show cracks and this coincided with the generous bequest from the Higginson family of Inver of their home property to the parish.

“This allowed us the luxury to take an overview of all our building stock and make plans for the future.  Under the leadership of the then rector, the Rev Stephen Forde, now Dean of Belfast, the vestry embarked on the process of deciding whether to refurbish the existing hall, to build a new hall on that site, which was at some distance from the church or to dare to dream to build a new hall adjacent to the church.  We dared!” Anne said.

After the decision was made, it took nearly 10 years to acquire the land from Larne Borough Council. Fund raising had commenced and plans had been drawn up by Ryan Kennedy of RE Quinn Architects, so once the land was in place the parish was ready to begin work.

Anne said: “Deciding things by committee is never easy but the select vestry worked well together, respecting each other’s views and progress was steady.  The schemes to raise funds were innovative and imaginative – definitely testament to you don’t know what you can do until you try!”

With planning approval in place, the majority of the funds secured and Martin & Hamilton Ltd appointed as contractor, building got underway in July 2018.

Throughout this period, parishioner Ronnie Lee volunteered to project manage from the church’s side and liaise with the builder and architect.

The official opening followed a service in St Cedma’s Church, at which the preacher was former rector, Dean Stephen Forde.

The building was dedicated by the Bishop of Connor’s Commissary, Archdeacon George Davison, who cut the ribbon assisted by Dean Forde and the present rector of Larne and Inver, the Rev David Lockhart.

Addressing the gathering in the Inver Hall following its official opening, Dean Forde paid tribute to the late Higginson sisters, who had bequeathed their home to the parish, giving a resource for the new hall, and to all who had fundraised to see it happen

“How many bags of recycled clothes, events, quizzes and concerts have brought us to this day,” the Dean said. “Nineteen Easter Vestries and incalculable hours discussing the size of the hatch and the shape of the toilets! So many people have given so much. We also remember some parishioners who are no longer with us but who wanted to see this day.”

Project manager Ronnie Lee paid tribute to Dean Forde for all the background work he did to bring the hall to reality. “No one will really know how much he did because that’s the way Stephen works,” Ronnie said.

“He had everything ready to hand over for the building to commence. It was a steep learning curve for me, but what I had to do was easier because of the support of the vestry and the great team around me. I cannot speak highly enough of all the professionals involved.”

Anne Marcus told the gathering that the parish owed Mr Lee an immense debt of gratitude. “This is a wonderful day,” she said. “Our hall is open. Together we have made it!

“People have been worshipping on this holy site for more than 1,000 years and we are the people who have been entrusted with its care and development at this time. We are proclaiming our commitment to God in this place.”

“We dared to dream,” Anne added. “Although it has been hard work, it has brought us together, we have developed new friendships and discovered just what we can do.”

The Bishop of Connor’s Commissary, Archdeacon George Davison, said it had been a privilege to be part of a ‘wonderful, inspiring’ evening.

“I want to thank you on behalf of the diocese, because things like this lift people’s spirits. When people read about this, they may take inspiration from the people of Larne.”

Echoing some of Dean Forde’s sermon, Archdeacon Davison added: “Don’t lose that sense of a community coming together to achieve something. Surely this building will now be a tool through which you will achieve many more things, inviting people to be part of the family of Christ in this place.”