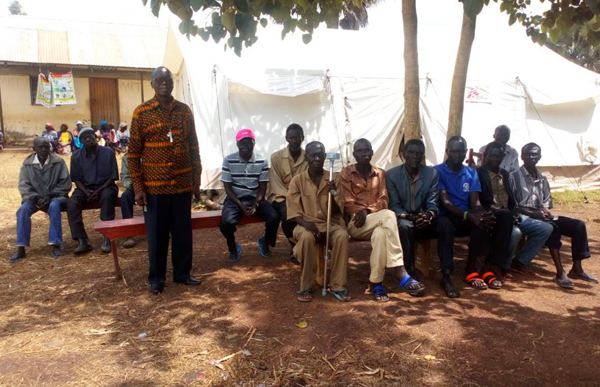 Bishop Hilary of Yei, standing, with older men who have been displaced to Yei town following fighting close to their village, and who have taken refuge in the grounds of Immanuel Cathedral. Photographed by Billy Smyth, CMSI.

Billy Smyth was sitting in an airport waiting to fly to South Sudan last month when news came through of violence just outside Yei town where he was headed.

“I was advised that it was still safe for me to travel to Yei as the town was well protected,” Billy said. “I have confidence in Bishop Hilary [of Yei], and knew that if he thought there was a risk to my safety, he would have told me not to come.”

Connor has been in partnership with Yei Diocese for more than 10 years. Billy, a short term mission partner with CMS Ireland, has lived in Yei, and was responsible to setting up a Vocational Training Centre (VTC) there. This was his third visit to Yei this year, in response to Bishop Hilary’s request that he help the people in the area rebuild their lives as South Sudan once again struggles with civil war. Billy has been tasked with helping get the VTC up and running again.

He travelled with Bishop Moses of Maridi Diocese and his wife Mama Rejoice, who were returning home after spending three weeks in Ireland, and Patti Johnston from Albany Diocese, which has a three-way link with Down and Dromore and Maridi dioceses. 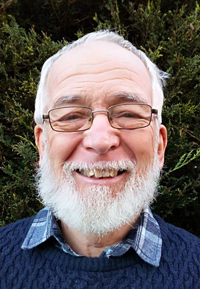 After a short stopover in Maridi, Billy flew on to Yei to find the Cathedral area swamped with displaced people. “It was really hard to cope with,” he said. “You have a settled African village full of children, a school, families caring for their goats and hens, and then in a couple of hours it is all gone.”

The incident, just 10 miles outside Yei, had been sparked when government troops encountered rebels in the area, causing everyone in the village to flee with nothing other than the clothes on their backs. Billy said there were up to 1,000 people seeking refuge in Yei as a consequence.

“The incident happened on Monday September 16, I arrived on the Friday and the next day visited the Cathedral complex where many of the displaced people have taken refuge. At that stage, the only assistance these people had received was from the Church. The UN didn’t start handing out food to the refugees for a week after the incident.

“At the Sunday morning service in Immanuel Cathedral, Bishop Hilary made an appeal for clothes, as these people, some of whom were injured, had nothing to change into, and there were no facilities for them to wash the clothes they did have,” Billy said.

The UN had put up some tents – there was a lot of heavy rain at the time, and the mornings were chilly.

“I saw old men sitting underneath a tree. They just want to live out their days in peace. For many of these people this will have been the third time they have been displaced,” Billy said.

“Now the authorities are saying it is safe for them to return home, but many don’t have the heart for it. They would have to start rebuilding all over again.”

Billy said CMSI was supporting the church to care for the displaced people in Yei through its disaster response fund, which is still open and taking donations.

“The people do not know when one of these incidents is going to happen again. They are living in fear,” Billy said.

“When I returned home from my visit to Yei in April, I was speaking of optimism, of a return to normality. But that has gone. The optimism has died and people are really struggling.

“The hope for peace now rests with the government of national unity to be announced on November 12.”

Despite the shock of this concerning situation, Billy’s role was to see how the VTC, whose official reopening he attended in April, is progressing, and to help the manager to identify funding sources to secure its future.

The centre offers vocational courses in tailoring, mechanics, plumbing, electrics and has recently added hairdressing and catering to its options.

Billy is normally out doing practical jobs – he installed solar panels to provide power to the office on his last visit – this time he was mostly office-bound. “I had the privilege of meeting the Provincial Education Manger of the Episcopal Church of South Sudan who is based in Juba [South Sudan’s capital],” Billy said.  “He told us there is a lot of support and potential funding for vocational training, it is just a case of tapping into it, and he advised us how to go about this.”

Billy added: “Making a secure financial base for next year is a priority.” A generator for the VCT is top of his list of requirements, and he anticipates returning to Yei next February or March.

Despite the lack of optimism, there are signs of progress around Yei. Bishop Hilary is hoping that the teaching training college, which the Bishop of Connor, the Rt Rev Alan Abernethy visited during his time in Yei in 2013, can be reopened, and he is also keen that work on a new secondary school which has received funding from Dalgany Parish, might soon recommence.