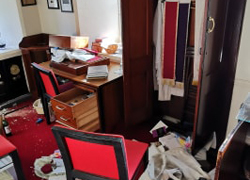 The vestry was ransacked during the Saturday night break-in at Christ Church, Derriaghy.

Sunday morning service in Christ Church, Derriaghy, had to be cancelled on November 3 after an overnight break-in which resulted in damage to doors and a window.

The would-be thieves tried unsuccessfully to prise two safes from the wall, damaging the masonry surrounding the safes.

When they failed to gain access to the safes, they went through the cupboards and drawers in the vestry, before smashing a wooden door and entering the main church. They smashed another door to get onto the upstairs balcony.

They had entered the vestry room via a small window, which was smashed.

A small window in the vestry was smashed.

The rector of Derriaghy, the Rev Aaron McAlister, said that the intruders had clearly been after money. He said that while the incident had been upsetting for the parishioners, the parish had been overwhelmed by messages of support, including calls from other denominations and churches in the area and further afield.

In post on the parish Facebook page on Sunday morning, Aaron wrote: “I choose not to be angry or frustrated over our church in Derriaghy being broken into and vandalised last night. I will not allow misspent energy to devalue God’s work. Instead, I choose to help with the clean-up, I choose to help getting the church back to its beautiful state, and I choose to continue working out ways to reach into the community. I will focus on the good we can do, rather than the bad that has been done.”

He was amazed that by Sunday evening, that post had reached 25,000 people. “I don’t want the last word on this to be that we were broken into, as this incident has touched so many people, I have made new links with clergy in the area that I have yet to meet, and the clergy of the Church of Ireland have been brilliant. That’s the good that comes out of the bad,” Aaron said.

Two internal doors were badly damaged by the intruders.

While the cost of the damage has yet to be finalised, Aaron said the parish was grateful that the church’s beautiful stained glass windows and books held in the church had not been touched.

The 11am service was cancelled to allow police to carry out their investigations, and parishioners were invited to attend the 11.30am family service in Derriaghy’s other church, St Andrew’s.

Fortunately a baptism at 1pm, which involved several visitors from England, was able to go ahead, as was the 6.30pm service.

Aaron paid tribute to all those who had helped to clear up the mess.  Writing again on Facebook, he said the response from local councillors, ministers from different denominations, Church of Ireland clergy, the police, parishioners, family, friends, colleagues and general public had ‘gladdened his spirit.’

The support he and the parish had received, he said, showed that people ‘really do care.’

The vestry room after the break-in.

Masonry was damaged as the intruders tried to prise safes from the wall.