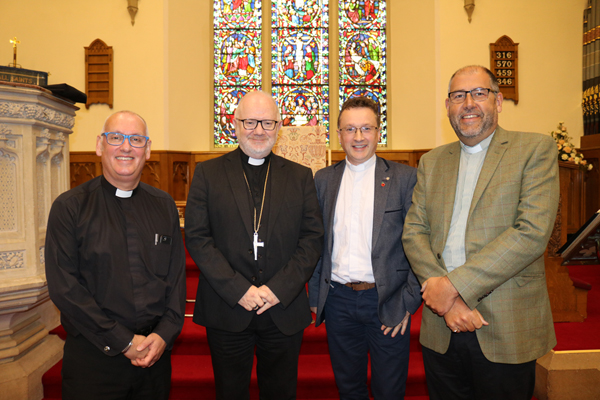 The Archdeacon of Connor and Vicar of Antrim, the Ven Dr Stephen McBride; Archbishop of Armagh, the Most Rev Dr Richard Clarke; the Ven Paul Dundas, Bishop’s Commissary; and the Ven George Davison, Archdeacon of Belfast, at the Connor clergy quiet morning in Antrim.

Connor clergy were ‘refreshed and challenged’ by the Archbishop of Armagh, the Most Rev Dr Richard Clarke, who was the speaker at a clergy quiet morning on November 5.

The archbishop, who announced his retirement as Primate at his diocesan synod in Armagh the previous weekend, said he had received a message from the Rt Rev Alan Abernethy, Bishop of Connor, who is also retiring soon, just before the start of the service which preceded Archbishop Clarke’s talks.

He said Connor Diocese was in a time of hiatus – ‘we are looking back and looking forward at the same time,’ the archbishop told clergy and Connor staff.

He delivered two excellent talks, the first focused on holding fast to what is good, and the second on Christian discipleship – exploring what is unknown.

Thanking Archbishop Clarke at the end of the morning, the Ven Paul Dundas, Bishop’s Commissary, said: “We have been refreshed and challenged by what you have said.”

The quiet morning took place in All Saint’s Parish Church, Antrim. Clergy were welcomed with refreshments before the service which was led by the Archdeacon of Connor and Vicar of Antrim, the Ven Dr Stephen McBride, and enjoyed lunch served by Antrim parish in the parish hall afterwards.