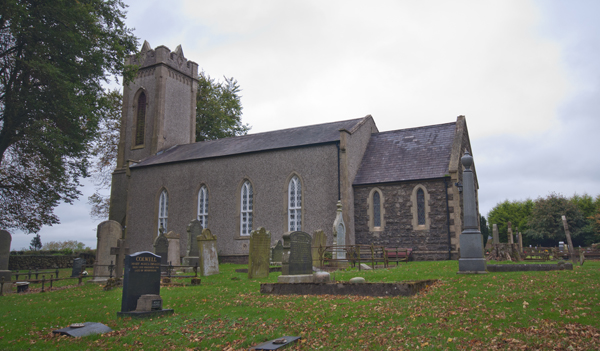 To celebrate its 175th anniversary, Ballyclug Parish Church is holding a Christmas Tree Festival from November 28 until December 1.

The church will be open daily during this period, and an official opening ceremony by the Rev Canon Ken Ruddock and Deputy Mayor of Mid and East Antrim Borough Council, Beth Adger MBE, will take place at 2pm on November 28.

Light refreshments will be available, with a special menu for groups of 10 or more – please contact Vera at 07515396369 for further details.

Coach parties are welcome and larger groups must book in advance by contacting Jackie Greer on 07710618196 or by email at william.greer0404@gmail.com.

The Parish of Ballyclug dates back to medieval times – the first recorded mention of the parish is in 1306.  The name Ballyclug signifies ‘Town of the Bell.’ The parish consists of quite a few townlands, one of which is Ballymarlagh.

It is in this townland that the present church is situated in a picturesque setting amongst trees about a mile from the town along the Larne Road. The original church was at Ballylesson but it was reported as being in ruins in the 17th century and today only the foundations remain.

The present church, designed by Sir Charles Lanyon, was built in 1844, thanks to the good services of Bishop Mant and the Diocesan Accommodation Society, together with donations from Henry Hutchinson Hamilton O’Hara Esq of Crebilly Castle, John Rowan, Esq, and other ‘religiously inclined and pious persons.’

Since then a chancel, vestry porch and more windows have been added and the whole building was refurbished in 1994 to mark the 150th anniversary of the church.

Inside is a bust of Mary O’Hara (Lady Wardlaw), and in the graveyard there stands an unfinished headstone to the memory of Henry Hutchinson Hamilton O’Hara (Squire O’Hara). Local legend has it that this was left incomplete to show that he died a ‘broken down gentleman,’ and was erected by his tenants and parishioners. The graveyard also contains many very old, family headstones.

There are also a number of plaques in the church commemorating past ministers and parishioners.