Real stories to help us remember 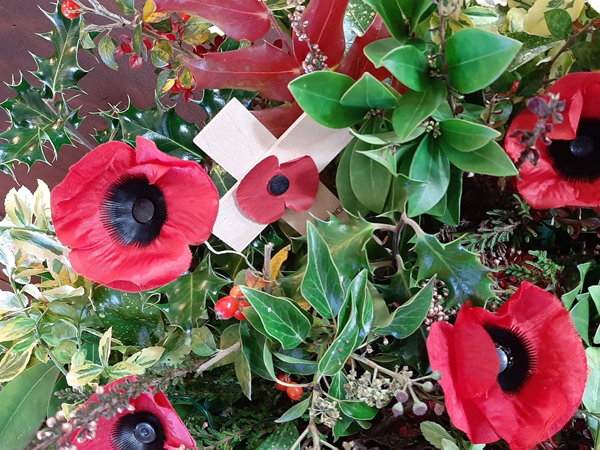 On this Remembrance Day, we bring you some stories of those who served in past conflicts – first reported in Magheragall Parish magazine, published this month.

David Maffett, May’s uncle, grew up in County Down and at-tended Down High School. David finished school in 1939 and he joined the Royal Air Force immediately at the age of 18. With the outbreak of war, David was of course already in the RAF, his training led to his first tour of duty. His first tour of duty was from January 1940 to September 1940 with 9 Squadron, Nos 3 Group RAF Bomber Command. During this tour David completed 30 operations over Germany, as a gunner on Wel-

lingtons. In September 1940 David was posted to No 20 Opera-tional Training Unit at RAF Lossiemouth. The unit was formed in May 1940 to train night bomber crews using the Wellington.

Whilst at RAF Lossiemouth, David received, in January 1942, a letter from Down High School and I quote directly from it;

Dear David, when at the recent Prize Distribution it was learnt that, in addition to the Headmaster and two of the Assistant Masters, 34 of the past pupils were serving in His majesty’s Forces, those present heartily approved the suggestion of the Chairman (Lord Bangor) that a message be sent them convey-ing greetings and good wishes. It is with great pleasure, there-fore, that we comply with this request.

In expressing to you the sense of admiration with which the school and all those associated with it regard your action in re-sponding to the call of duty in the hour of national peril, sacrific-ing for a time at least your own prospects in the future, we feel that we have every reason to be proud of your action, and we assure you that your example in this respect has set high the good name of the school.

It is our expectation that you will do credit to yourself in your new sphere of activity and that whatever the times ahead may bring, or whatever trials or hardships you may be called upon to endure, you will manifest in all circumstances those qualities of spirit, loyalty and devotion that have characterised the people of our nation through the years of the past. May we, in conclu-sion, in offering you our very best wishes, express the earnest hope that you will have a safe return when at length your pres-ently appointed task is fulfilled. On behalf of the school, we re-main, yours faithfully, Thomas Stevenson, Acting Headmaster and Robert Maxwell, Hon. Secretary.

Soon after receiving these words of encouragement from home, David was posted in April 1942 to RAF Marham for train-

ing on four engine Stirling Bombers. David was preparing to re-turn to operational duty. He went on the first 1,000 bomber raid on Cologne. Several sorties later he was shot down, it was the 7th August 1942. The following is a description of that night:

“On 7 August 1942, at 01.10 hrs Stirling N6072 took off for Duisberg once more laden with six 1000 lb general purpose bombs and seven 500 lb general purpose bombs. Around 02:57 hrs Stirling N6072 was intercepted and shot down, by Hptm. Ludwig Bietmann of 5./NJG1 flying a Messerschmitt Bf 110, to crash into the west bank of the Maas near Kessel, 2 miles south of Venlo. Three of the crew had managed to bail; the pilot, Sgt William Laidlaw, Wireless Operator Sgt David Maffett and Sergeant John Green the Observer, to become Prisoners of War.” The rest of the crew – WO II A L Bachelder, RCAF, and Sgts H.P.Gardiner, G.C.Cavanagh, and L.W.A.Barnard (Air Gunner), RAF – were killed in the crash. They were initially buried in a temporary military cemetery at Venlo. On 1st October 1947, they were re-interred in the Jonkerbos War Cemetery on the outskirts of Nijmegen in the Netherlands which contains 1,629 Commonwealth WW2 buri-als.”

In the 60th Anniversary year of the ending of the war (2005), David spoke about his experiences, describing the events of the 7th August 1942. David reflected on the death of four crew members and his own experience as a POW, he wrote:

“I was lucky to be alive. I was wireless operator that night. Only three got out, the pilot, navigator and me. They got out first and I was alone in the aircraft, until I bailed out.”

“I was a POW for three years in Silesia, which is now in Poland and quite near Auschwitz. The camp held 13,000 some from Dunkirk, some 51st Highlanders and the RAF prisoners. On January 22nd, in 1945, 3,000 of us were marched out. We had to march 20km a day and had just two breaks. We went to Duderstadt and stayed ten days, then across the Elbe at Mag-deburg. By the time we reached Lukenwalde, just 50 miles from Berlin there were just 145 of us still alive. We arrived in Berlin on the Wednesday and the Russians took over on the Saturday and held us for five weeks. Then they took us to the Yanks. We were flown to Brussels. I got back in June 1945 and was sent to RAF Cosford and then home. I was just 24 by then.”

David continued to serve his country in the Cold War finally coming out in 1956 and about those post war years he wrote:

“After the war I worked at the War Office and went back into the RAF to take part in the Berlin Airlift in 1949 when the Russians blockaded Berlin. From there I was posted to Lyneham in Wilt-shire. I then served in Singapore in the Korean War, taking freight, passengers and casualties home for two years. After that I took part in the evacuation of families out of Egypt in 1952 and after returning home became a lecturer at Halfpenny Green Airfield. This was where I met and married my wife Ida in 1954. Then came a four-year posting to RAF Fling College at Manby, Lincs (Cranwell) and I finally came out of the RAF in 1956.”

Thanks to May for sharing the story of her Uncle David. As his nearest relative, May has remembered and treasured his war time story along with his medals and his RAF Flying Log Books. May has decided that they need to find a home in a local mu-seum. 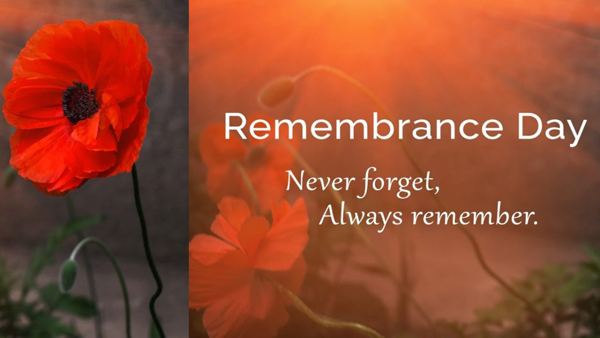 Samuel Bertram Campbell (Bertie) was born on the 22nd March 1912 in 42 Vernon Street, Belfast; Samuel and Margaret Campbell were his parents. On the 27th April 1928, just after his 16th birthday, Bertie enlisted in the Royal Inniskilling Fusiliers (Service Nos 6976233). By the time the Second World War broke out, Bertie had eleven years’ service behind him. The old adage ‘join army and see the world’ was very true, for the first six years of service Bertie was in the UK, then in 1934 he was posted to China which was where he remained until 1936 when he was posted to Malaya. In February 1938 Bertie was posted back to the UK. When War was declared in 1939, the 2nd Bat-talion Royal Inniskilling Fusiliers joined the British Expeditionary Force and on the 13th September 1939, Bertie found himself on the way to France as the UK responded to German aggression. We have all heard of the events of Dunkirk, when the retreating British Expeditionary Force was evacuated back to the UK un-der intense bombardment from the advancing German Army. Many soldiers made it back to the UK, many died in Northern France and many were captured. Bertie was captured on the 27th May 1940 and remained a prisoner of war until the 25th May 1945.

The prison that Bertie found himself in was Stalag XXA, a pris-oner of war camp located in Poland. It was not a single camp, the main camp was located in a complex of fifteen forts that surrounded the whole of the city of Torun Silesia. The forts had been built at the end of the 19th century to defend the western border of the Kingdom of Prussia. In September 1939 some of the forts were used as POW camps for Polish prisoners. In June 1940 additional forts were added to the camp to accom-modate British soldiers. The first to arrive were 403 men from the Allied campaign in Norway. Later about 4,500 arrived from Dunkirk and subsequently from the British 51st (Highland) Infantry Division captured at Saint-Valery-en-Caux. In 1941 and 1942 Soviet prisoners arrived. At the peak there were about 10,000 prisoners at the camp. The camp was liberated in 1945 by the Soviet Army but not before many of the prisons had been forced to march westward ahead of the advancing Soviet Army.

Below, a picture of Sergeant Campbell at the grave of fellow soldier, Ronald Story who died whilst a POW.

Bertie returned home and was discharged from service. His records show, under the heading, ‘Final assessment of Con-duct and Character on leaving the colours’ that his military con-duct was exemplary, and he was described as “a clean sober intelligent and hardworking man, has plenty of energy and initi-ative, trustworthy and reliable”.

Charlie has remembered and treasured his father’s war time story; thanks to Charlie for sharing the story of his father, Sergeant Campbell. 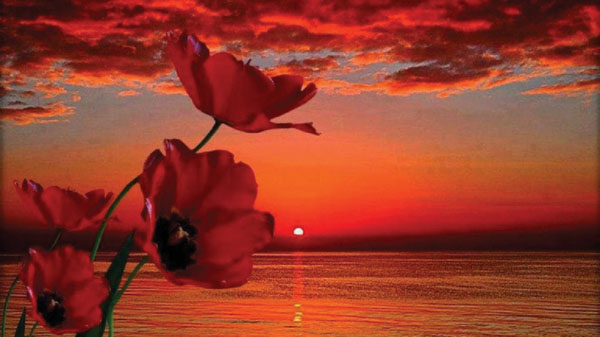 John 15: v.13 Greater love hath no man than this, that a man lay down his life for his friends.

May, of this year, was the 79th anniversary of the Evacuation of Dunkirk. During this evacuation, my grandfather, Gunner David Bannister, Royal Artillery, was killed. He had been protecting his fellow troops during their escape but was shot dead as he tried to approach the beach at Dunkirk. He had changed his birth certificate when he was 16 so he could fight in the 1st World War and fought in Africa in between the Great Wars.

My grandfather’s death was devastating to the family and my dad Samuel took it particularly bad. I remember my dad telling me how he would run home from school every day to see if there had been any news from the front about his dad. When the telegram arrived, my dad was broken. He admitted to me that this news changed him that day and he began to rebel against society. Thankfully for him at the age of 19 he decided to join the Royal Navy and it was the Navy that ‘straightened him out’ (his words).

In 1949 he was assigned to HMS Amethyst as a Stoker Me-chanic. In April of that year as they sailed up the Yangtze River in China they came under attack and my dad was seriously injured. He sustained shrapnel wounds to his chest. As the ship ran aground the Captain gave the order for some of the crew to abandon ship. My Dad and his friend managed to get to the shore, only to be captured by the Communist regime.

They were taken to a village hospital and operated on without anesthetic. Although this was horrific, it saved his life. After their treatment, they were permitted to return to the ship and later the ship made its daring escape.

This year was the 70th anniversary of this daring escape by HMS Amethyst and I was fortunate to travel to Plymouth with my siblings for the reunion. I met two of my Dad’s surviving shipmates and it was even more important as this year is the last reunion of the shipmates, unfortunately given their age, there are only a few of them left. I’ve been very fortunate in my life as most people never meet their heroes, but I was raised by mine.

I’m sure, like me, many families have loved ones who served and lost their lives for us. It’s so important to me to remember the fallen and I wholeheartedly agree that EVERY DAY IS REMEMBRANCE DAY.