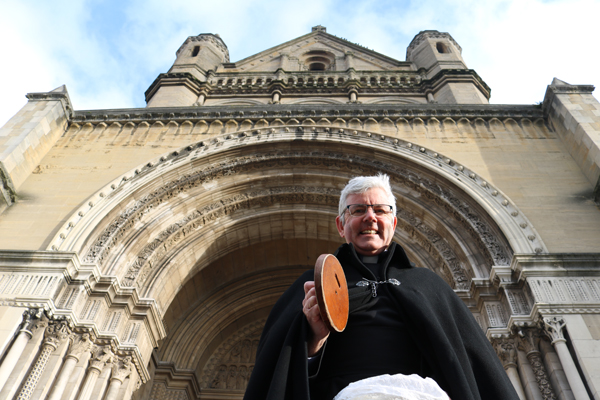 Dean Stephen Forde is preparing for the Black Santa Si-out 2019 on the steps of Belfast Cathedral.

The annual Black Santa sit-out by the Dean of Belfast gets underway on December 16.

Now in its 43rd year, the tradition was established in 1976 by Dean Sammy Crooks, and funds raised support hundreds of charities across Northern Ireland each year.

Black Santa stages his sit-out on the steps of Belfast Cathedral in the week before Christmas, Back in the early days, the Dean’s black Anglican clerical cloak led to Dean Crooks being dubbed Belfast’s Black Santa in the media, and the name has stuck for more than four decades.

Inspired by Dean Crooks, the four succeeding Deans of Belfast (Deans Jack Shearer, Houston McKelvey, John Mann, and the current Dean, the Very Rev Stephen Forde) have continued the Black Santa tradition, and each year the generosity of the people of Belfast and across the world helps the Appeal gather funds to support hundreds of charities.

These include groups working with mental health, the homeless, medical research, those caring for children, youth and the elderly, organisations working to improve employment opportunities, as well as a host of small charities which cannot afford paid fundraisers. A proportion of the money raised is also given to Christian Aid.

Each year, Black Santa receives hundreds of applications for funding. After Christmas, the successful applicants are invited to send representatives to the Good Samaritans Service, usually held in the following February where the donated funds are distributed.

Hundreds of charities across Northern Ireland need your support! An unusual fact about the annual Black Santa Sit-out is that the Cathedral does not take any donations for itself – all of the money raised during the sit-out goes directly to charity.