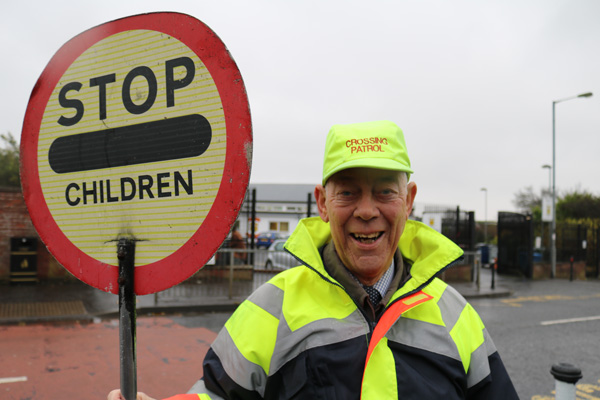 Top lollipop man Ivan Gibson outside Carnmoney Primary School where he has seen children safely across the road for 16 years.

Lollipop man Ivan Gibson is clearly someone who loves his work. Ivan has been helping children, parents, grandparents (and the odd Connor DCO!) to cross the road outside Carnmoney Primary School for 16 years.

And his commitment and daily good humour have not gone unnoticed, for Ivan was recently voted Belfast’s favourite lollipop person in a contest run by the popular Belfast Live website.

More than 3,000 names were put forward. The 10 who had the most nominations were put out to the public vote, and at the end of the process Rathcoole parishioner Ivan received 40 per cent of the votes cast. A cracking endorsement for the 78-year-old.

Ivan’s family have always belonged to the Church of Ireland and moved from Belfast to Rathcoole in 1962, becoming members of St Colmgall’s Parish Church. His father Alfred was a church warden and Sunday School teacher, and his older brother Alfie was rector’s warden on three different occasions.

Ivan married Irene in 1965, and they moved to live in Carnmoney, but remained members in Rathcoole Parish, where Ivan is now on the Select Vestry.  They have a daughter Jennifer and son Philip. Sadly, Irene passed away in 2014.

As a child, Ivan went to St Mary’s Primary School in Crumlin Road; did his 11+ year at Model Primary School; and his Junior Certificate at Annadale Grammar. He left school at 16 to start as an apprentice at Shorts Factory.  “My father was a great man for getting you into work,” he says.

Ivan moved up the career ladder at Shorts and was Product Production Engineer at Bombardier when he left to work for Rolls Royce in Dundonald, remaining there from 1968 until 1977. That year he moved to Sirocco Engineering Works, then on to LFE in Mallusk where he was Process Engineering Manager, before returning to Shorts until taking redundancy at the age of 60 in 2001.

“After I left Shorts I did no work for three years, then Irene told me they were looking for a lollipop person for Carnmoney Primary School,” Ivan says. “I applied and got the job and have been 16 years at this school. 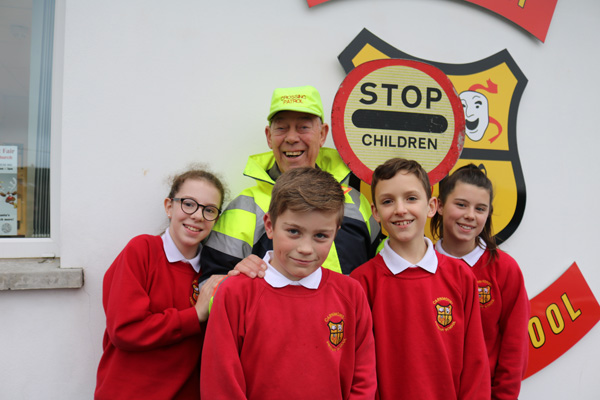 Ivan Gibson with some of the primary seven pupils at Carmoney Primary School, where he is a popular member of staff.

“The only thing I don’t love about the job is the weather – this is the coldest place in Northern Ireland you know,” he points out. No need really, as he is speaking on a gloomy Friday lunchtime – rain pouring down and a biting wind and the temperature two degrees lower than down below in Belfast!

But Ivan is undaunted. “The kids are great, the school’s great, the teachers and principal are all very down to earth. There is good discipline, the children have very good manners.

“We have good craic, the kids are so innocent. I do a lot of high fives, even with the babies.”

He works three and a half hours a day during term time – guiding children across the road first thing in the morning and at the different finishing times.

“I enjoy the banter with the kids and the parents and grandparents, and they enjoy it back,” Ivan says.” The presents I get at Christmas..! It’s embarrassing!”

He admits that drivers can be testing at times. “It is not so much that they are rude, but they can be distracted, or impatient – silly people. There are the boys who sit revving their engines, and I think you are a bit of a fool, because I am going to keep you waiting a little bit longer. The same with the boys who keep edging ahead.”

You get the impression that behind the smiles and the twinkle in the eye – Ivan Gibson is something of an Ironman when it comes to staking his authority in the middle of the road!

Ivan said news that he was Belfast’s favourite lollipop person had come out of the blue. “My son rang me to say I had won. I said ‘won what?’ Turns out the world and his Da were voting for me!”

He plans to continue to work as long as he is able. “It keeps me fit and healthy,” he says.  “School holidays are a big chunk out of my life, the weekends are long, although I go to church on Sundays. I get lonely.

“I lay my clothes for the next day out every night, and I do all my own washing and ironing and hoovering. You have to thank the Lord for your health. This job keeps me well and keeps me in touch with things.

“Just last week the children gave me a home-made card with a flower on it, and all the classes had signed their names on the petals. It was to say thank you for helping them cross the road and stay safe. It was just lovely.” 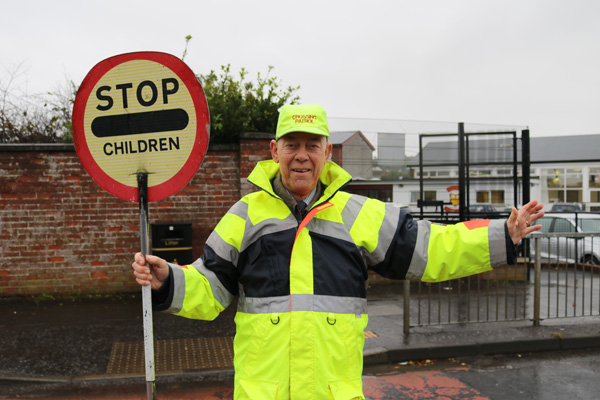