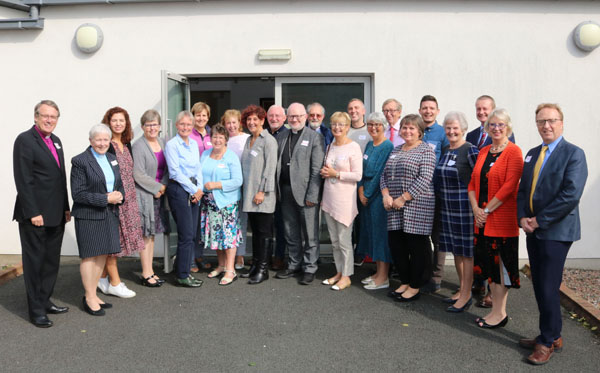 Delegates and guests at the gender justice seminar organised by the Church of Ireland’s Church and Society Commission.

The seminar’s aim was to seek views from participants regarding the most pressing issues that the Church should be addressing under the broad heading of gender justice.

Discussion was facilitated by the Rev Sally Foster-Fulton, Head of Christian Aid in Scotland, and sessions were chaired by Archbishop Richard Clarke, Bishop Kenneth Kearon (Chair of the Church and Society Commission), Ms Zephryn Patton and Mrs June Butler.

Delegates included representatives from the Mothers’ Union, Fields of Life’s I Am Girl campaign, PSNI, Board of Education (Northern Ireland), Church of Ireland Youth Department, Church of Ireland Theological Institute, and the Church’s Ministry of Healing.

DCI David McBurney spoke on trends in domestic violence and other forms of abuse, and Ms Jacqui Armstrong spoke on the efforts being made by Mothers’ Union to tackle gender–based violence. 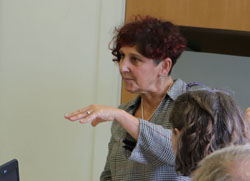 Discussions at the gender justice seminar.

“This seminar demonstrated the energy that exists within the Church to address gender justice,” Bishop Kearon said. “It now needs to be profiled high in the Church’s agenda. We all know it’s a huge issue, so we must now devise realistic first steps to enable us to begin that process. I don’t think it’s an exaggeration to say that our credibility as a Church in the future will depend on it.”

The event identified education, engaging with Scripture, and the use of language as three areas on which CASC could focus. The Commission will develop proposals for ways in which the Church can be effective in promoting awareness among clergy and lay members of the Church and improving the delivery of pastoral ministry to people affected by these issues.

“It was refreshing to note that everyone in the room recognised that gender justice was not a women’s issue but an issue for us all,” Zephryn Patton said.  “A consistent point borne out by all the delegates was the importance of being conscious of the language that we used in dealing with gender issues and that awareness–raising and education were paramount.”

Ms Patton added: “The world is changing and it is important that the Church develops policies that are cross-cutting and pro-active and are at the forefront of such changes rather than reacting to change imposed by society. This seminar is hopefully the first of many to come. I am optimistic that the energy and the points raised will be harnessed by CASC and developed into a strategy that the Church of Ireland and its members can endorse and more importantly put into active practice.”

Mrs June Butler noted: “Mothers’ Union has been raising awareness of the many and varied facets of gender justice for five years through its participation in the international  ‘16 Days of activism against gender based violence’ campaign and members’ local work with women’s refuges.

“The Church must now also actively address these wide-–ranging matters and work steadily to inform and educate clergy and lay, the young and more mature of both genders, with the ultimate aim of transforming all unequal relationships. This has to be a long-term commitment, rooted in scripture.”