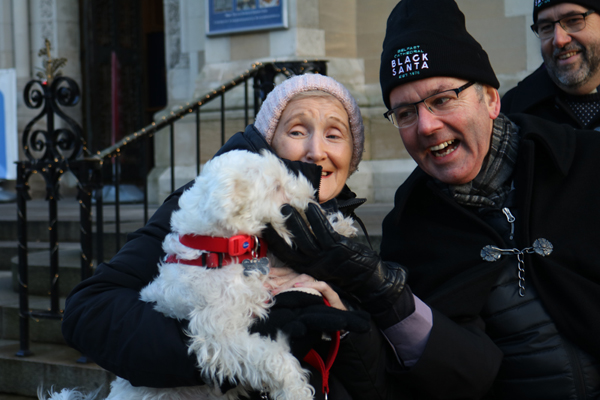 Battling a nasty virus which has laid him low for the past week and played havoc with his voice, Dean Stephen Forde launched the 43rd annual Black Santa Sit-out on Monday morning, December 16.

The sun was shining, but it was bitterly cold – thankfully Dean Forde had a number of Santa’s Little Helpers in the form of Cathedral Canons to help keep him warm. Not to mention a new Black Santa beanie hat to keep the chill from his head!

Spirits were high as the ladies and gentlemen from the Press posed questions and snapped pictures, and passers-by stopped to drop money in to the famous barrel. 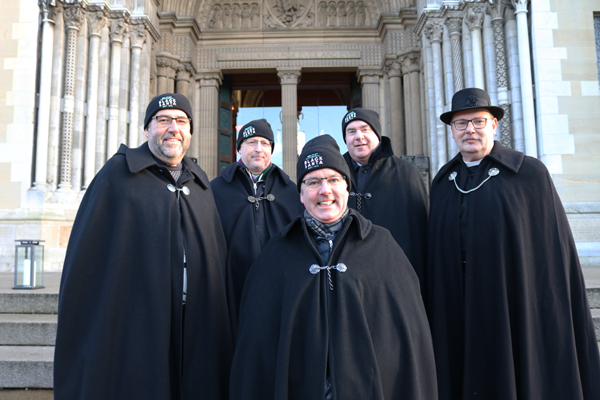 Black Santa stages his sit-out on the steps of Belfast Cathedral in the week before Christmas. Dean Crooks was dubbed Black Santa by the media because he wore a   black Anglican clerical cloak to protect him from the elements, and the name has stuck for more than four decades.

This year, Black Santa has gone contactless, allowing people to make a donation with just a tap of a card. Bags of pennies collected through the year, notes raised at special events in support of the appeal, and small change dug out of a pocket are still warmly welcomed, as are online donations which can be made at www.belfastcathedral.org.

So, if you are passing anywhere near St Anne’s Cathedral, please stop by and show your support for Dean Forde and the Cathedral Canons, helping them to help those in need in our community.