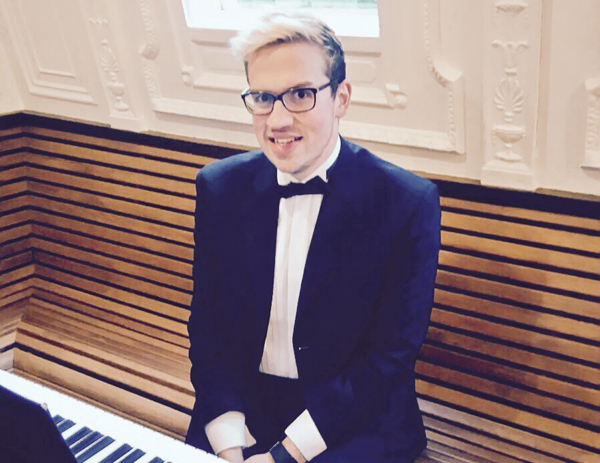 At the age of just 29, Simon Neill, Director of Music at St Polycarp’s, Finaghy, Diocese of Connor, has been awarded a British Empire Medal (BEM) in Her Majesty the Queen’s New Year’s Honour’s list.

Simon receives the award for services to music and community relations in Belfast. Simon created a Choral Scholarship Scheme in St Polycarp’s, which currently recruits choristers from 20 schools representing both sides of the community in Belfast and Lisburn. The scheme is supported by many local businesses.

Simon learned that he was to receive an award back in October. “When I saw the envelope it was so official looking that I thought I had done something wrong – I always think the worst!” he said.

“I was absolutely delighted, particularly as honours are normally awarded to people who are older, or who are exceptional, like celebrities or people doing humanitarian work. Since it was announced I have received a lot of positive comments. People have been fantastic.”

Simon has also recently been honoured by the Guild of Musicians and Singers who have awarded him a Fellowship for Services to Music in Northern Ireland.

His parents are Keith and Jennifer Neill. Keith was on the Executive Board of the Summer Madness Youth Festival, and also a former youth officer at Lisburn Cathedral. He and Jennifer now live in Kansas, USA, close to Simon’s sister Cheryl.

Simon read Music at Queen’s University, Belfast, and is a former student of Portadown College.  During his years in grammar school, he regularly competed in local festivals, and was awarded Portadown Musician of the Year for two consecutive years. 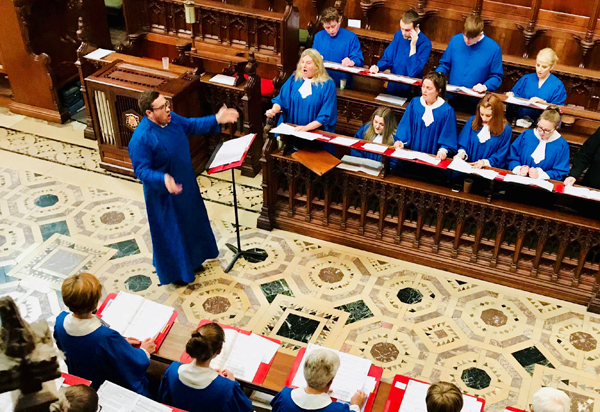 He received two scholarships at the age of 17; one from the local Education Authority to complete his studies as a flautist; and an organ scholarship from the Church of Ireland Diocesan Scheme with renowned City of Belfast Organist, Dr Donald Davison MBE. The following year, while studying A Levels, he was appointed Director of Music at St Polycarp’s.

While a student, Simon specialised in sacred choral music and piano accompaniment and began to challenge St Polycarp’s Choir to larger choral works such as I Was Glad, Blest Pair of Sirens, and Messiah in addition to several newly commissioned works.

The Parish Choir continues to grow with his creation of the Choral Scholarship Scheme which encourages trebles and teenagers to pursue singing.  At present, the choir boasts more than 50 choristers and a repertoire of over 600 works.

The Parish Choir has undertaken nine summer tours to such historic cathedrals, abbeys, and collegiate churches as Westminster Abbey, Truro Cathedral, Trinity College, Emmanuel College, and Queens’ College Cambridge, and this year will sing in St Paul’s Cathedral, London. It is honoured to have as its President and Honorary Patron the renowned musician, conductor, and former President of The Incorporated Society of Musicians, Dr Suzi Digby (Lady Eatwell) OBE.

Simon dedicates his time to teaching as a peripatetic piano, vocal, and organ tutor in Rathmore Grammar School and St Malachy’s College, Belfast.  He is a former member of the semi-professional chamber choir, The Priory Singers, founded by the late Dr Harry Grindle MBE.

He regularly accompanies local festivals, BBC broadcasts, examinations, and recordings.  Under his direction, the Parish Choir has recorded two CDs and will record a third next season.

Simon is a Trustee of The Ulster Society of Organists and Choirmasters which he served as Honorary Secretary for two years. He was a guest of His Royal Highness the Prince of Wales at Hillsborough Castle during a State visit in May.

He will return to Hillsborough Castle to receive his British Empire Medal at a ceremony in April, and has also been invited to a Garden Party at Buckingham Palace in July.