Billy receives his MBE from The Princess Royal 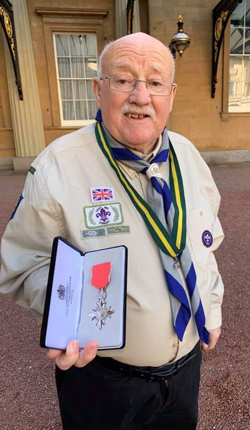 Billy Sholdis with his MBE outside Buckingham Palace on January 29.

Scout leader Billy Sholdis, 81, a parishioner of St Matthew’s, Belfast, was at Buckingham Palace on January 29 to receive the MBE he was awarded in Her Majesty the Queen’s Birthday Honours.

The award is for his dedication to scouts in the North West Belfast District, where Billy is now assistant scout leader of 20th North and West Belfast Scouts.

Billy was presented with his Honour by Her Royal Highness The Princess Royal.

Billy has been a scout practically all his life. He joined as a cub when he was eight, and, in his own words, ‘never really left!’

“I went through the ranks, starting as a cub when I was eight, and when I finished I began to lead the cubs,” Billy said.

The scouts meet in a hall in Bray Street, off the Woodvale Road. They now have a new hall, which replaced the original scout hut, a wood and corrugated iron structure which had previously served as a civil defence base.

Billy, whose mother was the troop’s beaver leader, walked to the hall from his home in Seventh Street, one of Belfast’s old ‘number streets’ – now demolished. The family worshipped in St Saviour’s Church, also long gone, and Billy then moved to St Luke’s, which closed in 2007, later joining  Ennamuel Church, Ardoyne; and St Matthew’s when he moved to his present home.

He left school at 14, and went straight to work as a cobbler with Rogan Bros in Shankill Road. “The company was known all over the province, I worked there for 20 years. I then moved to the Belfast Corporation of Libraries where I worked as a porter. We would be on the road every morning at 7am, cleaning the polished floors of all the libraries in Belfast,” Billy recalled. 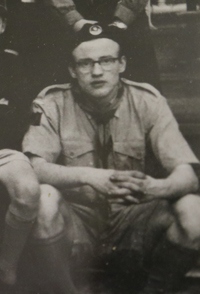 Billy in his younger days as a scout leader.

“It was hard work, especially during the Troubles, as our uniform looked like a police uniform. We did have a bit of bother but you got on with it. We just stopped wearing our caps.”

Billy has a love of gardening and moved to work in Woodvale Park until his retirement at the age of 55.

He never married, and says that scouting is his life. A room in the scout hut is a treasure trove of memories of faces, camps, badges, and other scouting activities from more than seven decades. Whatever was happening in the world around them, the scouts of North and West Belfast kept going.

“We worked right through the Troubles, we never closed,” Billy said. “We had a good set of leaders. The only thing we had to change was to tell the boys not to wear their uniform when going to the hall, just their scarves.”

“We have always taken the boys and girls on cross-community camps and still do.

“Scouting kept the young people and children out of trouble. They get to go camping and have the opportunity to meet other people. It is great for young people. I got my life out of it.”

Each morning, Billy walks the short distance from his home to the hall.  “I am what they used to call the unofficial caretaker,” he said. He returns on Monday nights for scouts, on Tuesday nights for cubs and on Wednesday nights for beavers and squirrels.

He said the scouts were ‘over the moon’ at the news of his MBE. “I have been doing this for such a long time I never thought about anything like awards. My reward was organising activities for the kids in the district,” he said.

Isabel Malcolmson, leader of the troop’s beavers and squirrels, said: “Billy helps with all the groups, and the boys and girls love him. It is a well-deserved honour.

This interview with Billy Sholdis first appeared in the Church of Ireland Gazette in November 2019. 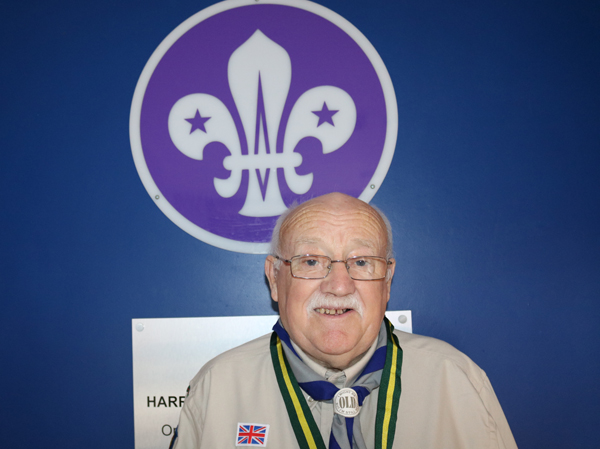 Billy in the 20th North and West Belfast Scout Hut in Bray Street.