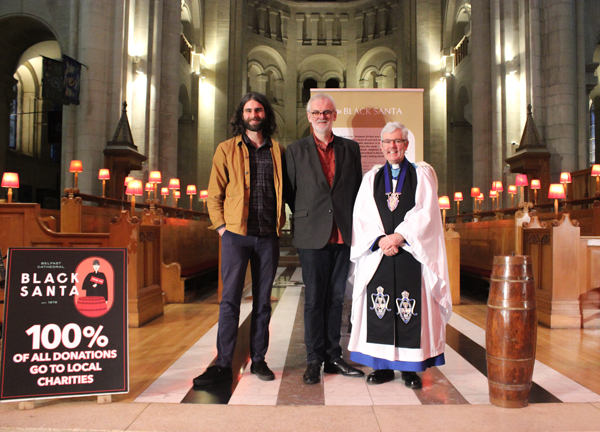 Money collected during the annual Black Santa Christmas Sit-Out for charities was handed out at St Anne’s Cathedral, Belfast, on Sunday afternoon, February 9.

Cheques worth a total of over £170,000 were presented to 198 charities by comedian and actor Tim McGarry at the Good Samaritans Service.

This was the 43rd year of Black Santa, which supports a range of charities across Northern Ireland.

The Dean, the Very Rev Stephen Forde, paid tribute to all those who had given so generously to the Black Santa appeal, which took place on the steps of St Anne’s in the week before Christmas. He said this year’s giving focused particularly on charities involved in the areas of homelessness, mental health and the refugee community.

Tim McGarry described himself as a long and true supporter of Black Santa, a tradition which, he said, made him proud to come from Belfast.

Singer Jonny Brooks, who works at St Anne’s as a Cathedral sexton, and can currently be seen on television as a contestant on ITV’s The Voice UK, sang Van Morrison’s ‘Sweet Thing’ during the service.