Institution of the Rev Linda Cronin in Glenavy 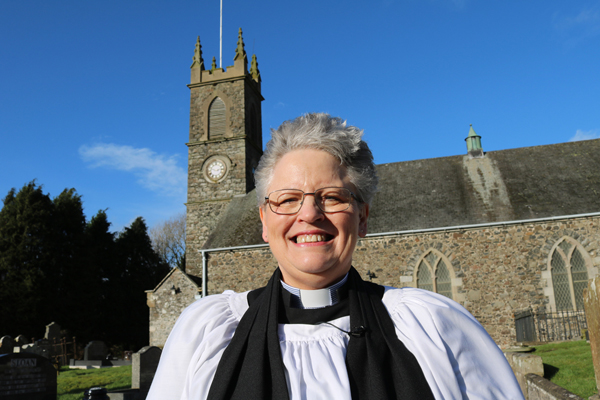 The Rev Linda Cronin was instituted as incumbent of the Parish of Glenavy on a bright and blustery afternoon on Sunday February 16.

Linda comes to Glenavy from Telford in Shropshire, where she has been vicar of Sutton Hill and Woodside Parishes in the Diocese of Hereford for the past five years.

Glenavy Parish includes the churches of St Aidan in Glenavy, where the Service of Institution took place, along with St John in Crumlin and St Andrew, Tunny.

Linda grew up in Newton Abbot in Devon, and married Steve after moving to London where she remained before ordination in the Diocese of Carlisle in the north of the country.

The couple has four children – Tim, Hannah, Dan and Rachel; daughters-in-law Caz and Becky; and two grandchildren, Izzy and Judah.

Before ordination in 2008, Linda had been a youth and children’s worker in a church in Brentford, West London, and was later finance officer in a Roman Catholic sixth form college in Ladbrooke Grove.

She was ordained in Barrow-on-Furness, where she was curate and then vicar until 2013, and was a chaplain at an Anglican and Catholic joint High School before her move to Telford.

Linda has said that she is ‘looking forward to the challenge of doing something completely different and seeing what God opens up.’

Linda was instituted by the Ven George Davison, Archbishop’s Commissary and Diocesan Administrator for the vacant Diocese of Connor.

The preacher was the Rev Dr Andrea Russell, Anglican Tutor and Co-Director of the Centre for Continuing Ministerial Development at Queen’s Foundation, Birmingham.

Following the service, the large congregation enjoyed light refreshments in the parish hall.