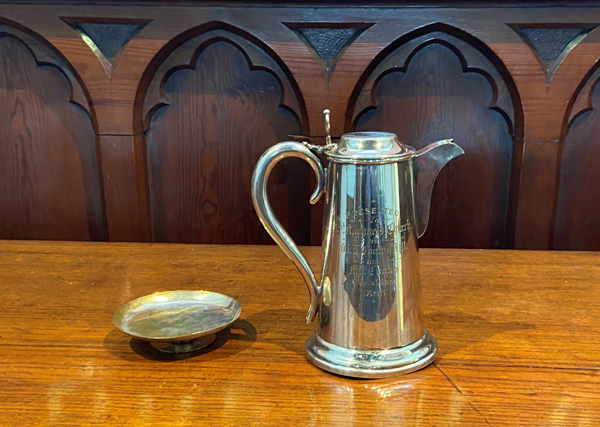 Back home – the communion flagon and break plate are back in St Michael’s.

A communion wine flagon missing for more than 120 years has returned home to the Parish Church of St Michael, Belfast.

The flagon was recently discovered gathering dust in the rectory of Christ Church, Derriaghy. On reading the inscription: ‘Presented to St Michael’s Church by W J Coates JP and Mrs Coates, Christmas 1893,’ the folk in Derriaghy cleaned it up and returned it to St Michael’s.

Tom Batchelor, St Michael’s treasurer and glebewarden, said the flagon, along with a communion plate, were on display in the church on Sunday February 9 – for the first time in more than 120 years!

Looking back to the foundation of the parish, Tom said that in June 1893, a small number of people gathered in a hall in McTeir Street, Shankill Road, Belfast. The hall was being gifted to the people by Mrs Deacon, widow of Rev I H Deacon.

It was renamed the Deacon Memorial Hall – DM Hall for short. The parish was founded as a mission district out of the parishes of St Mary’s and Trinity, off Clifton Street.

The Rev Richard Usher Greer was appointed as curate-in-charge. The congregation in July 1893 numbered just 24, but within three months grew to 265 at morning service and 370 at evening worship. The Parish of St Michael was founded September 1893, with Mr Greer appointed as rector in 1899, once the new church was built. The DM Hall then became the parish hall. 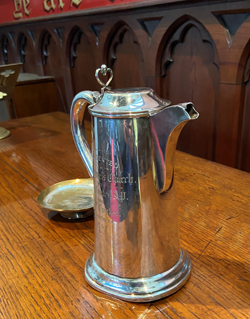 Members of St Michael’s gifted furniture, silverware, hymnbooks, etc. The Coates family presented the parish with a communion wine flagon and a bread plate in December 1893.

In 1899, the flagon and bread plate were loaned for a large church service, possibly to celebrate the dawning of a new century, but may have been mislaid after this. In 1900, the Select Vestry replaced the flagon, and this is what the parish uses today.

“As the flagon and plate had been missing for 120 years it was presumably thought it was lost forever. St Michael’s parishioners are delighted that this piece of their history has been discovered, and now reunited some 126 years after it was first presented to St Michael’s Parish Church,” Tom said.