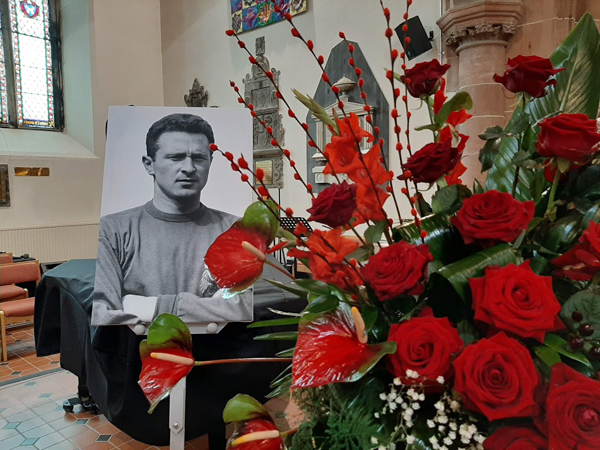 A former Manchester United and Northern Ireland goalkeeper, Harry Gregg was one of the ‘Busby Babes’ whose plane crashed in Munich in February 1958, killing 23 people, including eight United players. Harry rescued a number of survivors including a pregnant woman, a young child and team-mates Bobby Charlton and Jackie Blanchflower from the wreckage.

He continued to play professional football and went on to become a manager before returning to Northern Ireland. In 2015, he set up the Harry Gregg Foundation Youth League. Harry died on Sunday February 16 at the age of 87.

At the service, eulogies were delivered by sports broadcaster Stephen Watson and by former Northern Ireland manager Liam Beckett. John Gregg paid a moving tribute to his father.

The address was by Mr McCammon, and the Rev Ian Ballentine and Bishop Tony Farquhar also took part in the service. The church was packed, and the service was relayed to a large crowd of mourners outside.