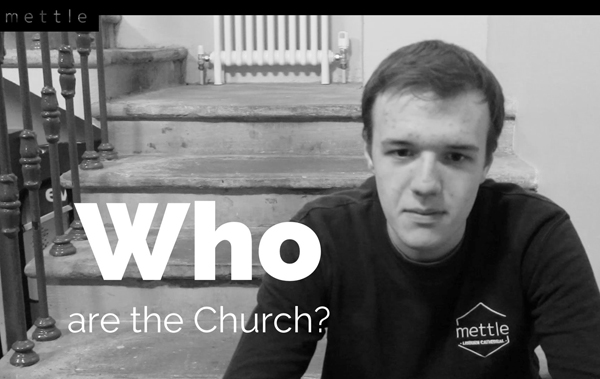 As our parishes get to grips with the demands of creating videos and podcasts and sharing these online, one group of young people had something of a headstart.

‘Who?’ is a series developed by a team of 17 and 18-year-olds from Lisburn Cathedral’s youth fellowship group Mettle from February 7 until March 8.

‘Who?’ explored four big identities of Christianity – I; Jesus; The Holy Spirit; and The Church. The series was a huge success, with many young people being impacted, challenged and encouraged by the identities that define our faith.  Here they tell us about more about the initiative.

“We wanted to see lives impacted within our church and community, particularly among young people, and thought a teaching series would be the best way to do this. What started off as a small idea escalated into something bigger.

“We took over our Saturday night youth group, Mettle, for over a month, and we provided worship, teaching, discussion and prayer ministry. We also made videos to go along with some of the sessions. Each of us had been really impacted by certain leaders as we grew up through Mettle, so we wanted to take this opportunity to inspire and encourage another age group in their walk with Christ, just as we had been.

“Some of the members of the group also were a part of the Serve leadership course run by Connor Diocese, and wanted to put what they learnt into practice.

“The series was aimed at 11 to 18-year-olds. We wanted to make Mettle accessible for all, so made the series appropriate for people to invite non-Christian friends and allow them to explore the Christian faith is a deeper way.

“Coming up with the ideas and the videos took a bit of brainstorming! We thought that the best way to interact with people would be to make videos tied in with the theme we were speaking about. This also meant we could share our message about Jesus with the wider community on social media platforms.

“Thankfully we had someone in the group who knew how to make videos and he really did pull it all together. The idea of the series Who? was intended to explore further the identities in Christianity that define us – I, Jesus, Holy Spirit and Church – and what that really means for you and me. We wanted to take a basic concept into something deeper with opportunities to explore and ask questions.

“The series was a massive success. The Holy Spirit moved in some amazing ways, impacting people’s personal lives and addressing their identity issues. There were 40-50 young people there most weeks, which was beyond what we thought would happen, proving that God was there in the middle of it all. The series didn’t just impact those receiving, but all involved, bringing us closer and making our friendships stronger.”

The Rev Danielle McCullough, curate at Lisburn Cathedral, said it had been ‘a joy’ to see some of the young people grow and flourish through the ‘Who?’ series.

“There was an amazing sense of the Holy Spirit moving as our young people listened, discussed, worshipped and prayed together each week. We are so thankful for the group of young leaders behind the series,” Danielle said. “They were responsible for the whole thing, designed it, planned it, wrote and delivered the talks and also created some incredible videos to go with the series.

“As a leader, it was so inspiring to watch some of them step out of their comfort zone and into leadership and teaching roles, which they took really seriously. We’re looking forward to seeing how we can continue to help shape and empower them as leaders and how God will use each of them in the future.

Videos from the series can be viewed at: https://www.lisburncathedral.org/mettle/who