An interview with Bishop-designate George 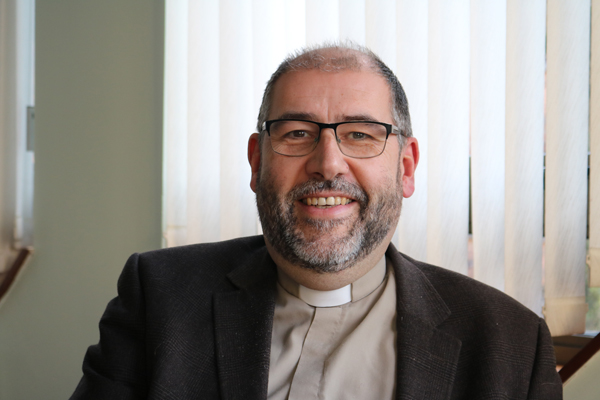 A little over a month ago (February 17), the Archdeacon of Belfast, the Ven George Davison, was elected Bishop of Connor by the Episcopal Electoral College for the Diocese of Connor.

The House of Bishops, at its meeting in Dublin on March 11, confirmed the appointment, and the Bishop-designate will be consecrated in due course.

Much has changed in our lives in a short period of time, but soon after his election, Bishop-designate George spoke about his appointment and future role in an interview in the Church of Ireland Gazette (March issue).

Here, we share the full Gazette interview, but please keep in mind that the interview was conducted and printed before the impact of coronavirus on our lives, churches and communities.

‘We have a lot of amazing people’

Archdeacon George Davison, Bishop-designate of Connor, says he is humbled and honoured at his appointment, announced on February 17 by the Episcopal Electoral College for the Diocese of Connor.

“I am very conscious of the great responsibility that is being entrusted to me. I am immensely thankful for the gifted colleagues who serve the Church in Connor Diocese, and look forward to serving with them as we seek to share the Good News of Jesus Christ in the years ahead,” he said.

The 54-year-old is an Honorary Secretary of the Church of Ireland’s General Synod, and was previously Archdeacon of Kilmore and rector of Kinawley, Diocese of Kilmore, Elphin and Ardagh. He is married to Nadine and they have two children – Erin, 26, and James, 23.

The bishop-designate said he is looking forward to his new role. “I see the life of the Church as a community and a team that works to build each other up in the knowledge and love of Jesus Christ, so I am looking forward to working with the team that is in place in Connor Diocese.

“I want to see every single person, ordained or lay, recognise that they have a part to play in this diocese. I’d like to build on what has been done already, and nurture a sense of us being the body of Christ – a sense that we need each other, that we can work together and that actually we are only at our best when everybody plays their part. We have a lot of amazing people. I want to encourage them to recognise the gifts God has given them and the call to use each one of those gifts in Christ’s service.”

The bishop-designate recognises that his appointment will raise his profile in the city of Belfast. “My role is primarily to build up the Church in the city. “I am not some sort of quasi-politician, but I do want to encourage people in our local parishes to play a constructive part in building good community relations with people from other denominations and none,” he said.

He believes changing patterns of society present a big challenge, particularly in north and west Belfast. “Parishes with long and proud histories of serving their community find themselves faced with declining numbers,” Archdeacon George reflected. “My priority in the city of Belfast is to encourage congregations to think about how best they can work together to grow the church and serve the communities around them.”

He is looking forward to working within the House of Bishops. “In a sense, my role as Honorary Secretary has given me the opportunity to get to know the bishops and to work with them, but there has been quite a radical turnover in the last few months and we are not done yet! These are exciting times in the Church of Ireland.”

Archdeacon George will certainly be a fledgling bishop when he attends the Lambeth Conference during the summer. [Editor’s note: The Lambeth Conference has since been rescheduled to summer 2021]. “It will be slightly overawing, coming so early in my new role, but it will be a powerful opportunity to build relationships with others in the Anglican Communion,” he said.

The bishop-designate is passionate about worldwide mission. “The Church is a global community and we all benefit when we engage with others around the world,” he said. “I have friends working in several different Anglican provinces and I’ve learned so much from the time I’ve spent with them.

Archdeacon George is a keen walker, and in 2017 took a sabbatical to walk the Camino Frances, covering 550 miles. He described it as ‘a remarkable experience.’ “On the Camino I found it easy to worship the Creator in the midst of His creation, I enjoyed the space for prayer and some interesting discussions about life and faith,” he reflected.