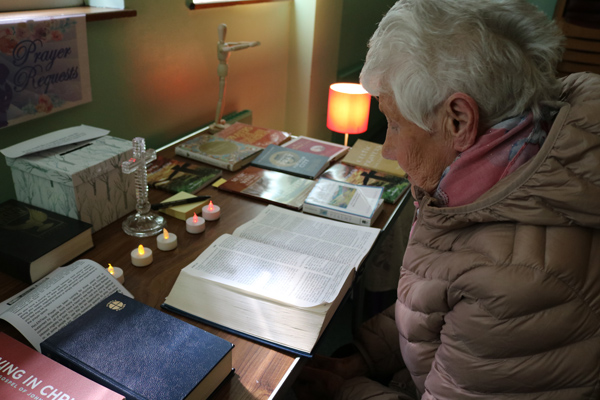 Like so many other initiatives, ReLENTless Prayer in north and west Belfast had to be suspended before it ended due to the restrictions in relation to the spread of coronavirus.

This was the third consecutive year Christian communities in north and west Belfast had come together during Lent in ReLENTLESS Prayer.

Announcing the closure of all current and planned prayer rooms on March 20, organiser Stephen Whitten, from the North Belfast Centre of Mission, thanked all those who had been involved in ReLENTless this year. “It is always an encouragement to stand together in prayer,” he said.

“However, this doesn’t at mean that there should be less prayer happening for this city! Let us be intentional with the time we have from the many cancelled activities and events, making space to pray and encouraging others to do the same.

“Prayer is powerful and the current crisis will create an openness to God and a need for His comfort for many people. Pray that the solid rock of the gospel will be revealed for many as it feels like other sources of security are shaken.”

Before the suspension of ReLENTless Prayer, we visited a couple of the prayer rooms and spoke to those who were taking up this opportunity to pray for north and west Belfast. The following article first appeared in the Church of Ireland Gazette (April 2020).

ReLENTless Prayer 2020 had a shared vision of encouraging people to pray and ask for God’s blessing and healing on the people and life of their community. Prayer spaces were open to everyone to drop in and spend time in quietness, to reflect and pray.

Central themes in prayer rooms included prayer for renewal and revival of faith in north and west Belfast, peace and harmony in communities, prayer for agencies that bring hope and help to the community, for doctors and hospitals, school teachers and a new enthusiasm for education amongst parents and children.

ReLENTless Prayer in north and west Belfast began when the Rev Canon Jim Carson and his wife Heather moved to the parishes of St Stephen and St Luke’s and St Michael’s. Having experienced ReLENTless Prayer in Lisburn, they wanted to introduce the idea to clergy and friends in north Belfast.

Jim and Heather encouraged the organisers of the monthly North Belfast Prayer Walk to join them in taking the initiative forward. This year, 27 churches and Christian communities of all denominations are working in partnership in prayer.

Each organisation hosts a prayer room on a set day or days throughout Lent. Many are interactive and some are simply quiet, reflective spaces.

“ReLENTless Prayer is an opportunity for churches to find a new radical centre ground based on prayer from which they can develop partnerships and collaboration to create a kinder, calmer, harmonious and cohesive community,” Jim said.

Stephen Whitten, of Connor Diocese’s North Belfast Centre of Mission, said ReLENTless prayer created spiritual unity between churches, and a sense of a shared vision for this part of the city.

“This area really needs prayer. It is one of the most deprived areas in terms of social economic indicators in Northern Ireland. Suicide is a major issue,” he said.

Many churches are declining in north Belfast, he added. “My opinion is that when people reject aspects of a higher purpose, some of life’s difficulties can be harder to deal with,” he said. “Having a relationship with God and knowing He has a plan for your life is emotionally, psychologically and spiritually huge. It changes people’s ability to face life.

“Our main prayer for ReLENTless is that it is a refreshing of faith, and that churches will be further equipped to connect effectively with people.”

Elsie Kirkpatrick visited the Prayer Room in Shankill Methodist Church.  “It is good to come in and find a bit of peace and pray for the world in the state it’s in at the moment,” Elsie said. “The Health Service is really in need of prayer. How are they going to cope with it all? Then there are the floods in England. Thank God we can remember them and pray for them.”

Muriel Hughes, from St Michael’s Parish Church, was also in to pray. “It encourages your faith, and the neighbourhood really needs prayer,” she said.

“Prayer is good for your mind and your soul. When you come to a place like this to pray you can see that you are not on your own.”

Fr Patrick Devine, Priest in St Vincent de Paul Parish, Ligoniel, brought a group of P6 children from their Parish school to the prayer room in St Stephen’s. “ReLENTless Prayer is becoming more popular and relevant and is very much needed in the north Belfast area. We genuinely want to work together,” Fr Devine said. “This is Ligoniel Parish’s first year taking part, and I am very excited about it.

“I have promised to engage in at least four to five prayer rooms during ReLENTless. Everybody’s journey is like a jigsaw. When all the pieces come together you make something beautiful.”