‘It is important to remember’ – WW2 veteran Bill Eames BEM 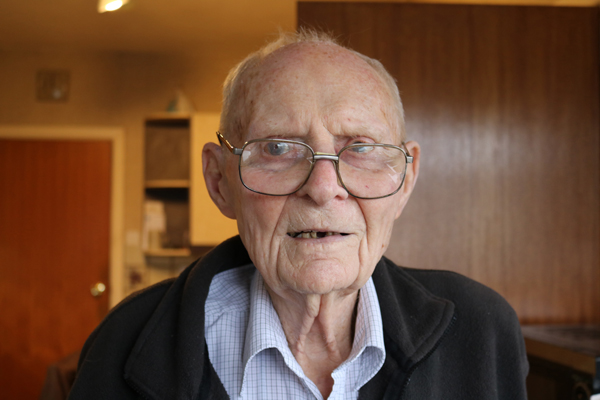 He towed gliders across enemy lines and played a key role in D-Day. Even after suffering serious injury when his plane was hit by anti-aircraft fire, Bill Eames guided his crew home and returned to battle just six months later.

Bill, 96, made flying his life, and his services both to the Royal Air Forces Association, as well as his community work in his native Co Fermanagh, were rewarded with a British Empire Medal in the Queen’s New Year Honours list.

Small in stature, with a firm handshake and a clear voice, Bill now lives a relatively quiet life in Lisburn, Co Antrim, where he is a parishioner of St Mark’s Church, Ballymacash.

Born in Enniskillen in 1923, Bill got to fly for the first time at the age of 12, when CW Scott’s International Air Circus visited Enniskillen. “My friend George McVitty and I both paid seven shillings and sixpence for the flight,” Bill recalls. “I thought it was great. George and I later joined the Air Force. George was killed over Germany before I had even finished my training.”

At Portora Royal School, Bill was a member of the Officer Training Corps. He joined the RAF in 1941, and travelled to the USA for secret training. “We were dispersed to different training schools. My group went to the US Air Corps, and I was nine months in Souther Field, Georgia,” Bill says. From there he was sent to Toronto.

“There were no phones so I just kept in touch with home through letters. In those days, parents deserved a lot of credit. Mine did not hold me back. I knew that they did not want to see me go off to war, but it was the thing to do.

“In the early part of the war, my uncle’s pub in Sheffield was destroyed by bombs. Fifty people sheltering in the cellar were killed, including my uncle and aunt. My cousin Jean, who was just a baby, had been evacuated to Enniskillen and she grew up as part of my family.”

On his return to the UK, Bill was stationed at RAF Ashbourne in Derby, flying Whitley and Albemarle aircraft. He later joined 570 Squadron at RAF Hurn near Bournemouth. His squadron specialised in supply drops to the French resistance operatives, generally at low level, at night. He also towed the Horsa glider. 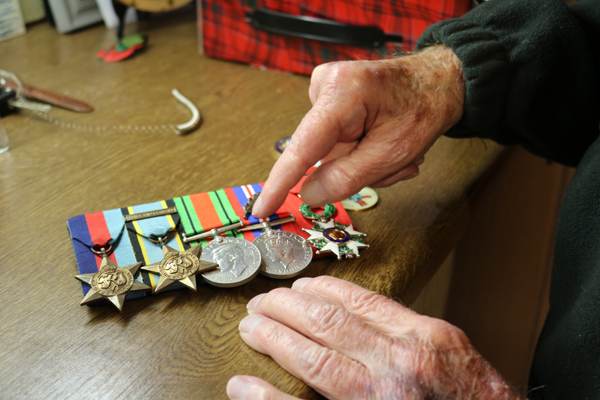 “A lot depended on the weather. We would communicate with wireless operators hidden in forests in the middle of the France to arrange the supply drops. It was a very difficult job, flying at night with all the flak [anti-aircraft fire],” he says.

“The glider was a large wooden aircraft, with a wingspan bigger than our planes. The biggest gliders would have carried a tank. The gliders I towed would normally have carried troops, along with a jeep and guns. They didn’t want to get onto the ground with no supporting weapons.”

Before dawn on D-Day, June 6 1944, Bill’s squadron towed gliders to Ouistreham, northern France. The troops he guided in helped secure Pegasus Bridge, an important target for the Allies.

“I was footloose and fancy free at the time and not particularly frightened, but we did realise the significance of what we were doing that day,” he says.

The pilots had been training for the operation in secret for a year. “There were dozens of us tugging the gliders in. They were heavy, so it took us five hours. It was a very unpleasant night, quite stormy,” he remembers.  “As soon as the Germans spotted us, the sky lit up like fireworks with flak. There were thousands of ships below us, but I couldn’t see any of them.

“Landing was fine – the weather had calmed down and bit and once we caught a flash of moonlight on the canal leading to the target area, we were able to land the gliders. Without the weight of them, we got home in half the time it took us to get there. I was back at base by 0600 having my breakfast, and we were all offered a shot of rum!”

In September 1944, Bill was involved in Operation Market Garden, the ill-fated Allied attempt to secure the Rhine crossing at Arnhem. “On the first two days I was dropping gliders carrying troops into the Arnhem area,” Bill says. “On the third day I was wounded very badly. There was a lot of flak. The troops on the ground were very hard pressed. We were detailed to drop in as accurately as possible, so had to fly as low as 500ft. My plane was hit by flak. I was struck on the leg and arm, and parts of the plane were very badly damaged.

RAF crew photographed when Bill was recovering in hospital after being hit by Flak over Arnhem. The three remaining members of Bill’s Squadron are standing on the runway, extreme left.

“I was not too pleased, but you have to take what comes. I kept thinking of the Battle of Waterloo when the boy turned to Wellington and said, ‘By God Sir, I’ve lost my leg,’ to which the Duke replied ‘By God Sir, so you have!’

“You have to keep going. I had a date that evening, back at camp, I had to get home.” So Bill helped his crew to bring the plane home.

Bill’s date didn’t happen that night. While he was doing battle over France, Fay, who was later to become his wife, received a call to say that her brother had been killed at Arnhem, and she had gone home to Blackburn. 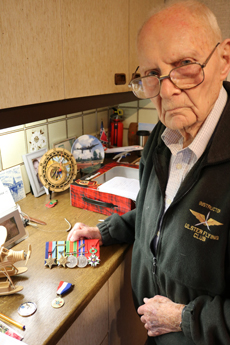 Bill Eames with his war medals.

Bill spent six months in hospital in Oxford, having been mentioned in despatches for his courage.

“I remember the chief surgeon coming round. I asked him if I could fly again. He replied: ‘No son, we won’t be asking you to fly again.’ My face just dropped.”

So Bill returned to active duty with 196 Squadron, flying Shorts Stirlings, dropping supplies to the resistance and taking part in the surrender of German forces in Norway.

He later became an air traffic controller in the RAF. His medals include the 1939-45 Star, the Aircrew Europe Star with France and Germany Clasp, the Defence Medal, and the War Medal with Mentioned in Despatches oak leaf and the Legion d’Honneur, France’s highest award, for his services in the liberation of France.

Bill left the RAF in 1947, and moved to the Ministry of Civil Aviation which brought him back to Northern Ireland. He continued to serve in the Royal Auxiliary Air Force, and later worked as senior air traffic controller at Belfast International Airport, before compulsory retirement aged 60.

He then became a flying instructor at the Ulster Flying Club in Newtownards, until, aged 80, retirement was forced upon him once again. Among his former flying school students is Lord Eames, a former Archbishop of Armagh and Primate of All Ireland!

His passion for flying is apparent in his Lisburn home, pictures of planes and wartime photographs adorn the walls, and model aircraft grace every surface.

David and Fay married in 1946. Fay, a parachute packer, was also awarded the Defence Medal. They have two sons, David and Peter. Sadly Fay died 26 years ago.

Bill stresses that war is not something to glorify, but to remember the sacrifice and the consequences that might have been, had the Allies lost.

“It is important to remember. We lost so many people. So many of my old schoolfriends died in the war,” he says.

Flight-Lieutenant Bill Eames, it was an honour… 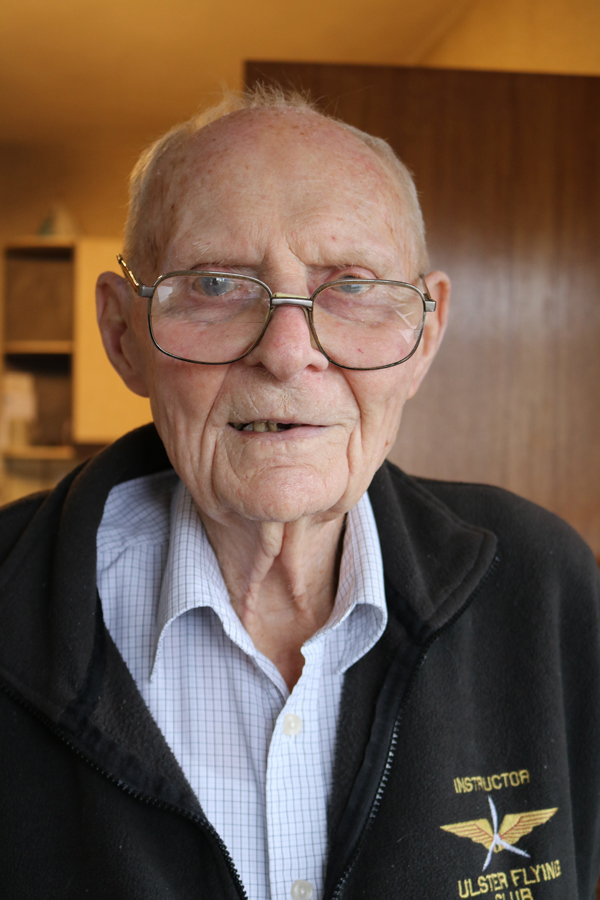